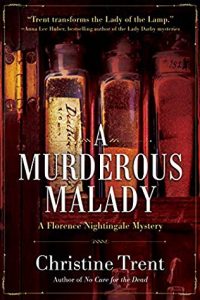 The second book in Christine Trent’s Florence Nightingale series is even more gripping than the first. The story opens with a friend of Florence’s innocently heading to the British Museum with her father and on the way, their carriage is attacked and their driver is killed. Because Florence’s friend is married to the secretary of war, the family wants discretion, and they ask Florence to investigate rather than the police.

Of course Florence is no lady of leisure – she’s running a hospital (the center of the action in the first novel) and in this novel, she’s asked to consult when cholera breaks out in the Soho section of London, a notoriously poor and miserable part of the city. She does agree to take on the investigation though. When another of her friend’s servants turns up at her hospital suffering with cholera, she’s on a tear.

The servant dies and the only clue are three oddly marked dice. Florence is sure deciphering the code scratched into the dice is key, and she goes about finding out what happened. I don’t know how closely the fictional Florence Nightingale as portrayed by Christine Trent is to the actual Florence Nightingale, but I suspect she’s pretty close.

As Trent portrays her, she’s a relentless force to be reckoned with. In the first book, her novel approach of opening windows and requiring the nurses to wash their hands was examined; in this one, while she went to her deathbed believing that cholera was caused by an airborne “miasma,” her approach to collecting data about the outbreak is far more scientific and forward thinking than most of the people around her.

In this novel, Florence encounters a Dr. Snow and a Rev. Whitehead, both of whom were ultimately responsible for tracing and proving that the cholera outbreak in the novel and in real life stemmed from an infected water main. The three of them in the novel make for an interesting match up, and you can almost feel the excitement, so many years later, as the three begin to puzzle out why there’s an outbreak, and in the case of Florence, what to do about it.

Florence’s investigation into the murder of the carriage driver also leads her into some knowledge of the British conflict in Afghanistan, one that will ultimately lead her to her famous hospital in Scutari. This novel was a completely compelling and enjoyable read, one that had me both wondering who killed the carriage driver, but even more interestingly, what caused the cholera outbreak.

Trent is a deft writer, skilled at illuminating her chosen time period via character and setting, so the history part is in equal partnership to the narrative. I literally can hardly wait for the next installment in the series, which will find Florence and her team of nurses on the way to Scutari. She’s already righteously engaged in this novel as she hears of the poor preparation on the part of the war department. 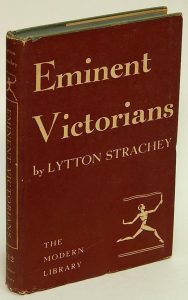 Trent includes some fascinating historical notes at the end of her novel, so even if you never read an author’s afterword, this one is highly recommended. For further reading I would also suggest Lytton Strachey’s indelible portrait of Florence Nightingale in his classic, Eminent Victorians (1918), which, thanks to google, can even be read online for free.