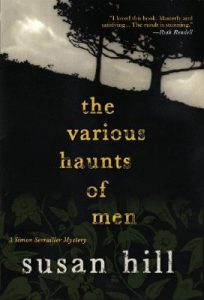 Branding the book as a “Simon Serrailler mystery” is a bit disingenuous, as Chief Inspector Serrailler is not the central focus, but a rather distant presence, reflecting the elusive nature of his character, particularly to DS Freya Graffam, a newcomer to the small English town of Lafferton, and the central agent of law enforcement in the narrative. Like the traditional English novel there are many other fully realized characters including the killer, his multiple victims, tangentially involved townsfolk and the town itself.

This is a long novel and a slow burn, and at first I was ready to fault it for dragging, but once I’d invested a little time and the gaggle of characters had clarified, I found myself racing through the second half, well rewarded by the expertly revealed plot points and a truly unexpected conclusion. This is a dark, complex book which sacrifices some of the more facile pleasures of the traditional mystery for deeper, more profound treasures. (Jamie)