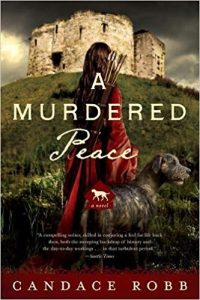 As the book opens, a friend appears of her doorstep in a snowstorm, requesting shelter.  Kate unthinkingly takes her in and only on reflection realizes the danger of taking in a woman who may be regarded at the worst as a traitor, at the least as a fugitive and corpse thief.  The woman, Lady Kirkby, has witnessed the beheading of her husband during an uprising in nearby Cirencester.

The world of 1400 York is in turmoil; the rightful King, Richard, has been imprisoned by what some consider a usurper, Henry, who has proclaimed himself Henry IV.  The morass of alliances, enemies and power relationships are both the larger focus and the more intimate focus of this book.  Kate is struggling with the moral and practical realties of hiding her friend; the larger society is struggling with the idea of an anointed King being imprisoned.

Kate’s problems are deepened by the disappearance of her beloved cook and steadfast friend and ally, Berend.  He was beloved by her household and beloved by many in York, so when he starts popping up in various alleys and byways, he’s concealed, despite the fact the Henry’s men are looking for him.

Kate has the good fortune slash awkward fortune of being befriended by one of Henry’s men, the knight Elric.  Each feels a powerful pull toward the other, frequently suppressed, and hampered by Kate’s concealment of Lady Kirkby and her very real fears for Berend’s fate.

As Elric and Kate become allies and then uneasy allies as Elric discovers what she has concealed, Kate is not only desperately trying to find and save Berend, she’s also trying to sort her life out.  She’s also, of course, trying to solve a few murders, which in typical medieval fashion have taken place through means of poison and throat slashing.

Toward the very end of the novel, Kate exclaims “I am sick of women being punished for their husbands’ foolishness.”  While much of the novel concerns the politics of the time, it also concerns the place of women and what they needed to do to both achieve and sustain control of their lives.   Kate’s not so unlikely ally is taverner Bess, an older, feisty, strong and wily neighbor, who helps to broker a solution to many of Kate’s troubles.

Kate, who conceals a throwing axe in her skirts and is accompanied by two giant hounds wherever she goes, is fearful of little except how to face the future.  Reading her exploits for three books now, however, I have no doubts of her success.