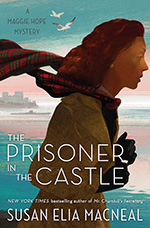 It’s 1942, and SOE agent Maggie Hope is stuck in the wilds of Scotland, essentially on a time out from the war. She and her fellow inmates on the Isle of Scarra are sequestered there because they know too much or seem to be in danger of spilling what they do know. Maggie, who was whisked to Scarra fresh from a Gestapo interrogation in Paris (The Paris Spy), is resentful she’s not doing her bit for the war effort. Her fellow inmates have all been traumatized by their war experience in various ways, but all of them feel the same as Maggie. Unfortunately, news of the war is almost non-existent and contact with anyone back home is completely non-existent.

The book opens with a chapter vividly illustrating exactly why one of the inmates is sent to Scarra, and as is typical of this author, the chapter is memorable, disturbing, and a good read all at the same time.

MacNeal beautifully describes the Scottish setting—bleak, cold, windswept. The castle, bristling with antlers, tartan and blowsy chintz, is also lovingly described and it’s not too far a stretch to imagine yourself in Scarra along with Maggie and her crew.

It quickly becomes clear that the novel is structured on the lines of Christie’s classic And Then There Were None, as body after body is discovered. The first two can almost be put down as accidental, but as the corpses mount, it becomes clear that someone on the island is picking off the SOE agents one at a time.

Back home there’s a discovery that a German U boat is in communication with someone on the island, grabbing the attention of the government up to the very highest level, i.e. Churchill himself. Maggie’s presence also seems to be required at the trial of “the Blackout Beast” (The Queen’s Accomplice) and so, as a reader, you live in hope that this unfortunate group is not completely on their own.

Because there’s a storm raging, however, no one can get to the island, even though the inmates keep communicating the rising body count to the mainland. While Christie’s novel provides a structure, within it, MacNeal has something to say (as she always does) about the place of women. One of the characters even says to Maggie at one point “because you’re a woman—people will undervalue you.” But as Miss Marple proved, overlooked does not equal powerless, and Maggie Hope is far from a shrinking wallflower.

These novels are insanely enjoyable, providing a brisk read, a fabulous central character, and stories that have grown increasingly interesting and complex with each novel. I loved the structure and setting of this one and wonder what the war has in store for Maggie.