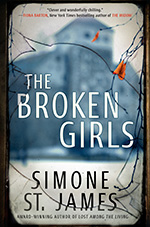 This book is a knockout. I’ve read several books by St. James, but this one is by far my favorite. While she doesn’t have a recurring series character, her novels are always historical, and they all feature an actual ghost. There are some mysteries where a ghost is suggested but turns out to be something else more explainable. St. James is firmly in the old school ghost story camp and it serves her well.

The school, Idlewild, had been a dumping ground for parents who no longer knew what to do with their children, children who were traumatized or troubled or inconvenient. The 50’s portion of the story centers on four girls – Katie, Roberta, CeCe and Sonia. All have their different issues, and the book opens with one of them running from something and it’s pretty clear whoever it is, is dead.

Fiona, a journalist, is intrigued that Idlewild is apparently being re-opened and renovated, and she begs her editor to let her write a story about it on spec. Both he and her policeman boyfriend are skeptical that she can be objective or even if it’s the best idea for her to rake up the memories of her sister’s death. But Fiona prevails and as she starts to write her story and starts looking for old denizens of Idlewild, she gets closer to the stories of the four girls.

Roberta had seen her uncle about to commit suicide, and refused to speak; Katie is nothing but trouble for her parents; CeCe is illegitimate and unacknowledged by her wealthy father; and frail, delicate Sonia has fled Europe and is a survivor of the Ravensbruck concentration camp.

The connecting thread across time is not merely the school but also the campus ghost, Mary Hand, who terrifyingly knows your most vulnerable places and fears and acts on them. There are all kinds of notes about her and whispered stories among the girls in the 50’s; but many years later, Fiona is also convinced she’s seen a ghost on campus.

This book was impossible to put down and so haunting. While every character in the novel has a sad story to tell, it’s also a story of bravery and survival on the part of some remarkable women who take the terrible hand they’ve been dealt and make something out of it.

The atmosphere of almost winter – the skittering leaves and cold air, and in Fiona’s time, the abandoned buildings of the school – create an environment that’s hard to forget once you finish the book. The girls – and the grown women – are just as memorable. While a scary and disturbing story, it’s also a strangely hopeful one. One of the best reads of 2018.