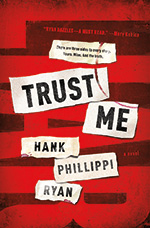 Timely, suspenseful, well crafted – all true, and irrelevant, as this novel is impossible to put down, so as you read you may simply be inhaling Ryan’s words. It’s going back into the story that gets you really thinking. Ryan frequently uses her extensive professional background as an investigative reporter to good advantage in her fiction, giving her characters, journalists all, a real ring of truth. It adds to the street cred of her novels. You can believe what she’s saying, because she knows what she’s talking about.

That said, she possesses another skill, one that’s not a mere transcription of her profession, and that’s a talent for storytelling. Without that particular gift, no novel lifts off the ground. This one has a tremendously addictive hook – Ryan’s central character, Mercer, is grieving the deaths of her daughter and husband. She’s so consumed with her grief she’s done little else but count the days since they left her side, memorializing them each day in the fog of her bathroom mirror by a number.

She’s pulled away from her grieving reluctantly by an old colleague who asks her to cover the trial of a woman accused of killing her toddler daughter, or “Baby Boston” as the child is known in the press. The child was roughly the same age as Mercer’s own daughter and the rage she feels toward the mother who threw away what she wishes every day she could have again is unmitigated. She agrees, and a crew arrives to install a live feed from the courtroom so she can watch the trial and write as she goes. The book is under a very tight deadline.

As Mercer watches and writes, she gets herself inside the heads of the “characters” in the Baby Boston drama – the parents of the accused and the accused herself. As she writes, the reader is allowed to read what she’s written each day and it’s incredibly believable, fitting the facts as she “knows” them from research and observation.

As the book is told in first person, your reliable or unreliable source for the “truth” is Mercer herself. Her reactions, as are the reactions of any human being, are those filtered through the lens of her experience, in this case, the grief she can’t escape.

The verdict comes about half way through the story, and the book is then turned upside down as Mercer is forced to deal, one on one, with the accused killer in order to finish her book. Meeting the woman, Mercer’s ideas of “truth” begin to change. What is true? The facts she can research, or is it the story the young mother, now a part of Mercer’s book contract, spins out as her own version of the truth?

Are facts so malleable? How about our interpretation of them? Interpretation is certainly malleable and we are front and center with Mercer as she tries to figure out who or what to trust and believe. Ryan is wrapping these profound thoughts in the comfortable clothing of a great story, but after I finished the book I could not stop thinking about it. Could I be so easily manipulated? Was Mercer? This is a wonderful novel, the best combination of thoughtful storytelling and unforgettable characters. Mercer will stay in your heart.