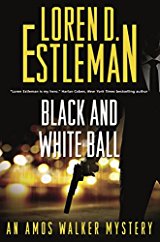 Deep into a now 80 book and counting career, and 27 in to his iconic Amos Walker series, what is Loren Estleman going to come up with that might be new? You might be surprised. In this novel Walker crosses paths with one of Estleman’s other characters, Peter Macklin, who hires Walker to look after his ex-wife. She’s being stalked by his son, Roger, who has gone into the family business – contract killing.

Dividing the segments of the novel into “Me” (Walker), “Him” (Macklin), as well as “Her” (the ex-wife) and “Them” (various, but often Roger) has injected a fresh energy into this novel. As always, Estleman writes tight – this book clocks in at 240 pages – and also as always, his prose and expression are absolute treasures. Reading an Estleman novel is almost like eating a too rich slice of chocolate cake – you have to read slowly, because if you don’t you won’t be able to savor the prose and the witty sleight of hand that comprises Estleman’s dialogue. People in an Estleman novel speak like you wish you could and maybe the way you would if you had a long time to come up with the perfect turn of phrase. Alas, I think there are few human brains that actually operate on that elevated scale, but it’s certainly a delight to encounter it in print.

The set-up is a pretty simple one and Estleman, a writer who hews closely to genre convention, includes a smart dame who can handle trouble. He really writes women well and his women are always worth reading about, another reason I enjoy his books so much. Like all of us, Amos is aging – he has trouble climbing the fire escape and hoping out a window, and at the end he’s too much of a gentleman to hit on a much younger woman (which I also appreciated) but even though he’s older he’s still operating at a high level.

The scenes between Walker and Macklin are charged with electricity as each man takes the other’s measure. Even though he’s a hitman Macklin has a certain code of behavior; Walker, who definitely has a code of behavior and has the much more impoverished lifestyle to prove it, is reluctant to take Macklin’s money but he’s really not given much of a choice. Almost more than anything else, the meeting between these two characters is the meeting between two practical realists.

This novel, mostly set in the smallish town of Milford, has the precise explication of small town life, especially during a Michigan winter, that Estleman readers have come to expect. While we may not be running around heavily armed, slipping through locked doors with a credit card or paying transients to watch our cars, just about every Michigander will relate to the white-knuckle drive Amos takes on a snow-swept highway during the height of a blizzard.

In every way this novel was delicious, and even if you’re new to Walker’s Detroit, it’s a trip well worth making. Jumping in at novel 27 won’t be too unsettling – you should be able to slide right in to Amos’ world. It’s a little gritty, but it’s full of honor.