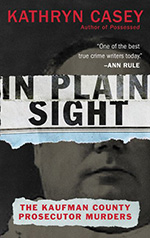 Kathryn Casey is America’s greatest living True Crime writer, as evidenced by the fact that her books have been reviewed more often by Aunt Agatha’s than any others in that genre. The reason for this is simple—Casey has a firm grasp of the most important ingredients for any writing, fiction or non. First and foremost is character, and her latest has a doozy of a cast. She has a real talent for presenting the histories of the major actors in such sharp detail that the fatal product of their collision seems somehow inevitable.

Eric Williams and his victim Mike McLelland were both oversized personalities, with swaggering self-confidence, machismo to spare and lots and lots of guns. They’d clashed in local politics, generating a heap of ill will, and when the dust settled, Mike was DA and Eric was Magistrate in their small patch of Texas. When the DA had the chance to go after the Magistrate for a minor and unclear piece of workplace theft he went all in, stripping him of his position, his law license and, perhaps most importantly in today’s America, his health care, particularly crucial for his chronically ailing wife.

Since he had no actual courtroom experience, Mike enlisted the assistance of an experienced trial attack dog, Assistant District Attorney Mark Hasse. The two crowed about laying low Eric, who they considered a nerd and wimpy wannabe. Sadly for them, the same ethical vacuity that enabled him to casually walk away with a few computer monitors presented no barriers to revenge killing.

You learn a lot about the actual state of America from a expertly done True Crime book, particularly a state like Texas. The anti-gun control mantra of the efficacy of “a good guy with a gun,” is disproven when the bad guy has the drop on you with an assault rifle, despite your having “a gun in every pocket.” All the players here seem to have large arsenals and cowboy hats, the former no more a deterrent than the latter. As the victim’s son’s said, “It was the most ironic thing that’s ever happened in this world. My dad got shot and he’d been preparing for a gunfight forever.”

The role of law enforcement is another element shown to be much different than found in crime fiction. Not only is there no Poirot brilliantly putting together the pieces to find the killer, there doesn’t even seem to be a dogged Law and Order effort to run down the evidence. With the high profile killings there’s a plethora of cops and Feds, but they seem to confine themselves to running lab tests, looking at surveillance tapes and waiting by the phone for tips. The reader wants to shout at them to drag the pond, check out abandoned vehicles or at least tail the obvious suspect, but they seem incapable of following these simple crime tropes until tipped off. Perhaps another telling point about contemporary American justice is that the perp doesn’t come close to apprehension until he runs out of money for high priced lawyers and lets his own overblown ego lead the defense.

At well over four hundred pages In Plain Sight is quite a read, but it’s certainly worth it. Casey also had the clever idea of integrating the photos with the text, rather than clumping them all in the middle. Nobody does True Crime better, and, as I always say, you couldn’t make this stuff up. (Jamie)