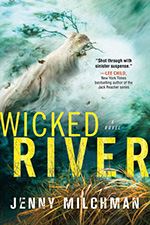 Jenny Milchman’s talent for suspense is of a very high order. I read lots and lots of mysteries – obviously – but it’s rare that I read a book that makes me so squirmy I have to put it down a couple times as I read it. She reminds me of Joseph Finder, in that I had to keep telling myself that this was fiction and wasn’t actually happening.

The book opens at a lovely wedding, but of course, as any suspense fan knows, this wedding is not going to end well. In this case, it’s not the wedding that’s the problem, it’s the honeymoon. Natalie and Doug have a camping/canoeing trip planned for their honeymoon, one that takes them deep into the Adirondack wilderness.

Natalie is not so sure about the trip, but the enthusiastic Doug has convinced her that two weeks of hiking, canoeing and portaging will be fun. And at first it is, though since I hate the idea of camping, it didn’t sound fun to me. But then, through a series of calamitous events, they lose their GPS and their way and end up in a part of the park that’s totally wild and rarely traveled.

About half way through, Milchman turns up the heat and makes this excellent chase novel ALSO a detective story with a twist I didn’t see coming. Then she adds to the mix an escaped prisoner who has lived on his own in the woods for a couple years. He’s fit, lonely, and terrifying, and he keeps an eye out for any hikers that come his way.

As Doug and Natalie begin to suffer seriously from their unplanned trek into deep wilderness, the man comes into play in both a good and a bad way. Milchman is expert at making you feel what the characters are feeling, and part of the reason she’s so good at it is that she is able to make the reader invested in what is often a central female character. In this case it’s Natalie, who undergoes an emotional transformation of sorts during the course of the novel.

This is a wonderful, vivid story, with great characters, an unforgettable setting and a bad guy and suspense that doesn’t stop. This was an exhausting read, but a worthwhile one. I have to say I was delighted to have read it on my sofa, not in a tent in front of a campfire. Shiver.