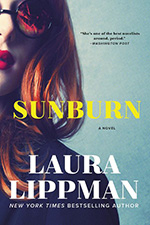 Laura Lippman’s ode to James M. Cain is masterful. As I began reading it, I thought it was going to be based on The Postman Always Rings Twice, and it is, but it’s also based on Double Indemnity and Mildred Pierce. Cain’s ingenious, scathing stories were pure story, punctuated with the inappropriate yet raging desires on the part of the female characters, whether it was Cora, Mildred or Phyllis, and the somewhat clueless collusion on the part of the males in their orbit. All of Cain’s females have a burning idea of how to proceed. So does Lippman’s Polly – an understatement. She’s also expert at waiting for results.

The book opens with Polly walking out on her husband and daughter and vanishing into the little town of Belleville, Deleware, where she becomes (of course) a waitress. All her careful plans go to hell when P.I. (though she thinks he’s a guy whose truck has broken down) Adam walks into the bar. While Adam is scoping out Polly, the careful Polly is scoping him out as well. A classic triangle emerges: the other waitress, Cath, has a thing for Adam too. While Cath is wily in a somewhat feral way, she’s no match for Polly, who emerges triumphant with Adam.

The first part of the book is the slow burn between Polly and Adam and their eventual raging desire for each other. Before he knows what’s happening, Adam is existing on Polly’s terms rather than the other way around. And up to this point, even with the whole prologue of Polly leaving her family, the book wasn’t grabbing me. It was well done, as Lippman’s novels always are, but it wasn’t until she jumped in with an old story of insurance scams involving Polly’s violent first husband that I was really hooked.

The other thing, of course, that makes this novel so contemporary (even though it’s set in the mid-90’s) is Polly’s awareness of how she’s treated or perceived as a woman. When she leaves her family, she thinks to herself that a man would not be so censured. He would be cut a break. She only ends up in Belleville because the old man who gave her a lift tries to put his hand up her skirt, and she demands to be let out of the car. She’s a good waitress but she doesn’t let herself really relax around her customers; she holds herself back a bit. Human interaction is a bit like a science experiment to her.

As Lippman proceeds to pull back the layers of Polly’s back story – her two husbands, her own violent past – Polly begins to come more and more into focus. Adam loves her but doesn’t trust her. At one point, another character, realizing Polly often wears yellow and looks her best in it, also thinks to himself “Still, he has to admit that yellow, the color used for warnings and caution, suits her.” She’s utterly fascinating.

Lippman is also a master, every bit as much as Cain, at plot, though she goes about it differently. The twists, when they come, are well set up but still something of a shock. I guess bad behavior is shocking. If Cain’s novels – short, brutal and honed to a fine point – were about the breathless committing of a crime, the modern crime novel, while also about committing a crime, is very much about the aftermath. Lippman is a master at aftermath.

This languorous novel, spanning Labor Day to Christmas, is in a tight time frame but unfurls like a slow fever dream. While the homage to Cain is ever present, Polly is all Lippman’s own creation. The complex plot is lightly told and clearly laid out, but chilling all the same. This story will definitely stay with you for quite awhile after you finish it.