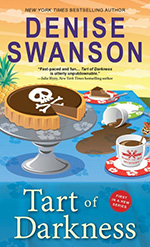 Denise Swanson is a wonderful storyteller and one of the things she’s exceptionally good at is creating a “mean girl” character. Herself a high school social worker for many years, I’m sure Ms. Swanson knows the type, but in this outing, the first in a new series, she creates a doozy.

The set-up: central character Dani Sloan has left her HR job and has unexpectedly inherited a Victorian mansion. The mansion has not been totally rehabbed but it does contain a new chef’s kitchen, and Dani, in the middle of reinventing herself as a personal chef and caterer, takes it as a sign that she’s on the right path. When one of her former neighbors, college student Ivy, gets kicked out of her former apartment building, Dani takes Ivy and her friends in as boarders. A perfect setting for a new series.

Dani, while older than the girls and serving as more or less a de facto housemother, gets drawn into their drama. When Ivy begs her to cater a party for the super popular Regina, Dani reluctantly agrees. Regina, the mean girl of the title, is so nasty it really takes the entire book to reveal all of her misdeeds, but since she’s so outstandingly nasty it’s a pretty safe bet that her time on planet earth is limited. Indeed it is, and Dani and Ivy are immediately cast as suspects.

Making things more uncomfortable: a vengeful, spiteful detective in charge of the case. Making things more comfortable: Ivy’s hunky uncle Spencer who swoops in to help out. Dani and Spencer obviously have feelings for one another but Swanson is far too canny a writer to let things take their natural course in a first book.

One of the best definitions of a cozy I’ve ever heard comes from cozy writer Vicki Delaney: “The characters live in a very pleasant world and their goal in solving the crime is to return their community to its pleasant state.” Swanson has created here an extremely pleasant world. The reader desperately wants Dani to get back to her “normal” life. Solving the murder helps to accomplish that, but there’s obviously room left for this vivid and funny new series to continue to grow and flourish.