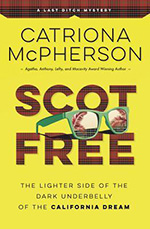 This light, funny, delightful novel from Catriona McPherson introduces readers to native Scot Lexy Campbell. She’d fallen for a hunky American and ended up moving to California where they married and lived in what she describes as a “beige barn,” the type of house familiar to many Americans as a McMansion. Objections to her husband’s lifestyle choices aside, he’s also a cheater, and Lexy walks out on him on the 4th of July, moving in to the Last Ditch Motel. She’s sure this is temporary.

Lexy’s job has been to work as a marriage counselor, and on this same ill fated evening, one half of her only client couple, Clovis Bombaro, is killed by an (apparently intentional) exploding firework. Clovis’s wife, Vi, has been arrested for the crime but Lexy is sure she’s innocent and heads to the courthouse to help Vi post bail. There are plenty of people sympathetic to the plight of long time resident and business owner Mrs. Bombaro, and she is allowed to head home, Lexy at her side.

McPherson then manages to introduce a swath of totally fascinating supporting characters – many of whom live at the Last Ditch. Most memorable is the germ-obsessed Todd, who takes over Lexy’s clothing and underwear choices and redecorates her ratty motel room. At the same time, McPherson is also gently skewering American culture and shining a light on the chasm between the haves and have-nots. Oh, and I forgot to mention – Lexy is deathly afraid of fireworks, so when she’s asked by Mrs. B. to tour the fireworks factory with her she has many, many reservations.

There’s a death in this novel for sure, but it happens off canvas and as readers we don’t really know Clovis, so it’s not a tragedy. Lexy and her self-appointed helper Todd begin to unravel the strands of Clovis’ murder, but there are plenty of twists and surprises thrown in before they get to a solution.

The humor and satire in this book is never forced, it’s completely natural, which makes it all the more hilarious. I found myself snickering and outright laughing as I read (embarrassing in the store) and I can’t recommend this highly enough. A perfect smart escape read that made this reader very ready for another installment.