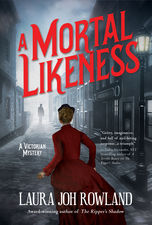 The second novel in Laura Joh Rowland’s Sarah Bain series, this one has no need to establish character and setting. It just takes off. Sarah, a photographer, is now working with her friend Lord Hugh as a private detective with a minimal amount of success so far. As the book opens, the two are on the trail of an adulterer, who they follow to the Crystal Palace in hopes of catching and photographing him in a compromising situation. This part of their scheme goes well, and the two take off when the man spots them and chases them off.

When Sarah goes home to develop the photographs, they have clear evidence of wrongdoing for the man’s wife to take to court, but Sarah notices a man in the background who appears to be her long-lost father. She can’t help but return to the Crystal Palace the next day to look for him, but when she gets there she finds the couple has not only been murdered, but they seem to be somehow tied to the kidnapping of baby Robin Mariner, the son of the powerful Sir Gerald Mariner.

Sarah and Hugh decide to take their information to Sir Gerald rather than the police (a sticky wicket, as Sarah’s beau is a policeman) and Sir Gerald hires them on the spot to come to his home and see if they can solve the crime. He suspects a family member, not an outsider, despite the evidence of a ladder outside the nursery window the night of the disappearance.

The two are also required to sign a confidentiality agreement, so Sarah leaves for Sir Gerald’s without telling her policeman boyfriend where she’s headed. She just tells him she’s “visiting a friend.” They also leave in the lurch young Mick, a homeless boy who has recently moved in with them. They give Hugh’s valet with instructions only that Mick should continue to attend school.

To say Sir Gerald’s household is dysfunctional is an understatement, as it’s filled with resentful adult children from other marriages as well as his new young wife (mother of Robin) and her sister, Tabitha, as well as a psychic Lady Alexandra keeps around to help her communicate with Robin. Sarah and Hugh are resented by Sir Gerald’s butler who is loath to give them any inside track on the inner workings of the household.

As they begin their investigation they are hampered in their efforts by a serious fire in their rooms and the death of a member of the household. Rowland is adept at creating a setting, and she’s created some very sturdy and interesting characters to center her series on. Mick of course shows up halfway through the proceedings.

The family dynamics of this story make this very much a psychological mystery, and the resolution is both surprising and creepy. Rowland also left a nice fat juicy thread to pursue in the next book – Sarah still has not found her missing father. There is plenty to discover and relish in this very enjoyable book.