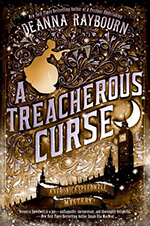 The third novel in Deanna Raybourn’s delightful Veronica Speedwell series finds Veronica busily at work with her buddy, Stoker, sorting donated artifacts for a proposed new museum sponsored by their patron Lord Rosmorran. They live on his estate and Veronica is also able to pursue her own passion, butterflies. Set in 1888 London, the whole country is in the grip of Egyptology, as fabulous artifacts and tombs were frequently being unearthed by wealthy British who brought them back to England for display and sale.

Veronica and Stoker are not immune to an interest in Egyptology, and when Stoker’s former wife appears to be at the center of a controversy with a missing husband as well as the missing diadem of an Egyptian princess, Veronica is keen to solve the puzzle and save Stoker’s reputation, which has only recently recovered from a beating. Their queries take them first to the leader of the expedition, Sir Leicester Tiverton and his family – his second wife, his difficult adolescent daughter, Figgy, and a family hanger on, Patrick Fairbrother, an assistant to Sir Leicester in their expedition.

The luckiness of Sir Leicester’s find – an Egyptian princess in a sarcophagus – is his crowning achievement; the missing diadem, a sour note. Also a sour note is an apparent curse – the god Anubis “appeared” on the dig, driving out the workers, and “causing” the death of one of the expedition’s members as well as the disappearance of another. only giving grist to the curse. As Veronica and Stoker pursue their enquiries and “Anubis” continues to appear, the curse appears to have followed the Tivertons to London as they prepare for an exhibit of their excavations.

Raybourn is a pro, and she populates her novel with an array of delightful, memorable characters and she’s aces at putting together a good plot. One of the stand out parts of the book is Veronica herself, an intrepid adventuress who lives outside the bounds of Victorian convention.

While presently this seems to be the year of the empowered woman, mystery novels have offered the empowered woman a home from the start – beginning with Christie’s Miss Marple through Sue Grafton’s Kinsey Milhone to Laura Lippman’s Tess Monaghan. The thread in historical mysteries is especially strong. Characters like Amelia Peabody, Hester Monk, Tasha Alexander’s Lady Emily, Rhys Bowen’s Molly Murphy – these are all intelligent and fearless women. They may often have male companions but they are perfectly well able to get the job done themselves. Veronica Speedwell fits in nicely with this company.

Along with Veronica herself, the book is a total blast. The story is nimble and interesting and full of adventure – a fire! A balloon! a trek through a sewer! – and through it all Veronica and Stoker live to investigate another day. I enjoyed the denouement and was sorry to close the cover, and really, what more can you ask for in a good read? I await more adventures with great anticipation.