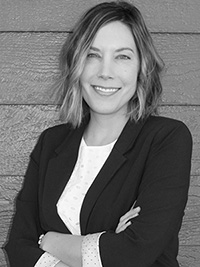 I had meaning to get to Emily Littlejohn’s books for awhile – mainly thanks to a blurb from Deborah Crombie – and with a rare “free reading moment,” I picked up the second book and was immediately smitten. The blend of the Colorado setting, indelible characters, twisty plots and a haunting overlay of folk tales in her now two novels, got me completely hooked. She was nice enough to answer a few questions.

Q: I just finished your first book, and had a hard time believing it really was a first book, as you write with such a mature and nuanced voice.  What led to this first book?

A: I have always been a huge reader, especially of mysteries and horror fiction. After working in public libraries for over a decade, I felt I’d been exposed to enough good (and not so good) literature to have an understanding of what might make a good story! I’d always wanted to try my hand at writing fiction and I tinkered around on a few drafts of some books that will never see the light of day (they are that bad). When I decided to get serious about writing, it came very naturally.

Q: I loved that the main character, Gemma, was heavily pregnant in the first book and realistically dealing with an infant in the second.  I’ve enjoyed many police novels by women through the years (Anne Wingate and Barbara D’Amato to name two) that really dealt with the balance of work and child care in a realistic way.  Was this something that was important for you to write about?

A: Ironically, I was six months pregnant with my first child when Inherit the Bones was published. At the time I wrote the book, I loved the idea of a strong, pregnant detective. As I’ve gotten further into motherhood myself, it has become even more important to tell Gemma’s story. Like so many women in every industry, Gemma really does struggle to find that balance between career and family.

Q: While these are certainly technically procedurals, they fall heavily into the traditional detective category (to my delight) but I’m assuming you still needed to ground your story realistically,  What kind of research did you do to get the police details right?

A: Does watching Law and Order count as research? I have a couple of reference books that I use when I need to get a particular detail correct, such as the name of a weapon or a point of procedure. I try to include enough detail to be realistic yet not so much that the reader gets bogged down in the minutiae. I joke that if I don’t include too many police details, I’ll have less that I can get wrong!

Q: Another thing I enjoyed immensely, brought out differently in each novel, were the references to folk or fairy tales.  A Season to Lie was especially haunting with the use of the Yeats poem.  What drew you to these references?

A: After including an element of folklore in Inherit the Bones, I knew I wanted to do the same in A Season to Lie. I stumbled upon the Yeats poem while flipping through an old book of poetry that my father gave me years ago. I’d never read that particular poem before and I found it incredibly visual and striking. I love the idea of my fictional characters alluding to other works of literature, so it was fun to place a particularly nasty character into A Season to Lie who happened to have a fondness for quoting great poets.

Q: I thought both books confounded expectations in a good way.  In the first one, you use the circus as a background, with a dead clown, which sounded cheesy but definitely wasn’t.  The circus setting was very effective and I wonder how you came up with the idea for using it as a background?  You really brought “The Greatest Show on Earth” down to reality.

A: As I started to write Inherit the Bones, three things came to me sort of all at once, and those three things laid the groundwork for the story. They were: pregnant cop; small town still living with unsolved trauma; and dead clown in full make-up. To be perfectly honest, I have absolutely no idea where those three ideas came from. A muse? My subconscious? No idea. But the image of the dead clown, especially, was very striking and I found myself wondering who the person was, behind all that make-up. I knew I wanted to write his story.

Q: In the new book, a dead writer is found in the snow, again, almost cheesy.  He even has a note stuffed in his mouth.  But then you ran with it.  I guess what I’m asking is what steps to you take to make the unbelievable not only real, but resonant?

A: That’s an interesting question and one that I’m not sure I can answer. I only know that as I write, it’s as though a movie is playing in my mind. I can see the setting, the characters, their next moves, all of it. The farther I get into a story, the more detailed and rich it becomes, and the more real it feels. It truly does start to seem as though this really happened. And I’m simply recounting it for the audience.

Q: What do you start with when you begin a story?  Plot, setting, character?  All seemed essential in both books (my definition of a really good book).  What is it that kicks off a story for you?

A: For me, character drives everything.  If I can’t feel something for the characters—positive or negative—I could care less how spectacular or inventive the plot is. What really kicks off a story for me is typically one or two thoughts…or questions. For Inherit the Bones, it was “who is this dead clown and what if anything does he have to do with an unsolved crime from thirty years ago?” For A Season to Lie, it was “why has a famous author been murdered on the grounds of a private school in the middle of a blizzard?”

Q: One of the other things I truly enjoyed was that while Gemma is grappling with the darkness of her past as well as the darkness of the cases she deals with, she’s also trying to see what’s good in life.  What do you see for Gemma, going forward, as she grows as a character?

A: Gemma will continue to try to find that elusive balance between career and family. She and Brody, her romantic partner, will either settle into domestic life… or they won’t (I know what happens, but no spoilers allowed!). Her grandmother’s dementia is of course progressing and I see Gemma representing that sandwich generation, where she’s caring for an ailing parent (figure) and at the same time caring for her child. And of course crime never sleeps in Cedar Valley, so there will continue to be murders and mayhem.

Q: Can you name a book that was transformational for you?  One that truly set you on the life path of reading/writing?

A: I don’t know about transformational, but I read a lot of Stephen King, Dean Koontz, Michael Crichton and Robin Cook in my younger years. Real page-turners. I grew up in a house where there were a lot of books, and nothing was off-limits to me. So, from a very early age, I was a voracious reader. But I didn’t have the confidence to take a stab at writing until I was much older. That’s probably my biggest regret… I wish I’d started writing ten years before I did!

A: I’d be happy to! Lost Lake takes place over the course of a few weeks in spring. Gemma is called out to the beautiful but isolated Lost Lake after a young woman disappears on a camping trip. Shortly after, a priceless artifact is stolen from the local history museum and the missing woman’s boss—the museum director—is viciously killed. Are these three crimes connected? As Gemma investigates, she learns of the tragic and gruesome history of the lake… a lake that seems to hold secrets worth dying for.