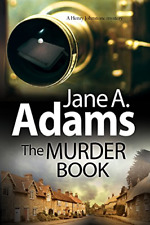 This book hits the ground running and invites you, as a reader, to keep up, plunge in, and take off along with it. Set in the British countryside in 1928, the setting is one I’ve rarely read about, and the characters, gypsies and the hard-working poor, ones rarely focused on. There are two threads to the story, and it took me awhile to figure out where the author was heading and what she had in mind.

The book opens with the murder of little Ruby Fields, whose mother is a prostitute. When she hears sounds that don’t seem right she breaks into her mother’s room and is killed as more or less collateral damage. Ruby’s mother is killed too, as is a third man whose identity is not disclosed until about halfway through the book. The local police, sure there’s a mess afoot as some of Mrs. Fields’ customers were of the propertied class, call in the “murder detectives” from Scotland Yard.

The two Scotland Yard men, Henry Johnstone and his assistant Mickey, arrive and take control of the investigation, starting with the bodies, who have been found in a shallow grave in the back yard of the building where Ruby and her mother lived. As I read, I kept forgetting it was set in 1928 – it seems at times to have been set in 1828 – but then the detectives gather evidence like hairs, bloodstains, and fingerprints, and pass a woman in a cloche hat on the street, and I remembered.

The other thread concerns the community of gypsies, specifically Ethan, Helen and Frank. Frank and Helen have long been promised to one another by their families; but love finds Ethan and Helen and as the two men work on the same farm, and the community is tiny, feelings run high. When a tragedy occurs on the farm the murder detectives are called in to that case as well, though the farmer and landowner doesn’t exactly hold with out-of-towners stepping in to resolve matters best handled by themselves.

There are two halves of the book. The first part mostly concerns the investigation into Ruby’s and her mother’s deaths, and this half showcases the careful and intelligent detective work of Henry and Mickey. Henry seems careful, methodical, and responsible. When they are working, Mickey has to remind Henry to eat, and that serves to make him more human. Throughout, we get a look at Henry’s own “murder book,” notes he keeps during each case. They help the reader to know how his mind works.

The second half of the novel, concerning the crime at the farm and detailing the lives of the incredibly hard working poor who made things work, showcases Henry as arrogant, thorough, and only out for a solution, little caring about the people involved. He gets his man in the case of Ruby and her mother; the ending of the other thread, while in no way ambiguous, is incredibly heartbreaking.

The uncomfortable meeting of the present and the ways of the past – in place for generations – is beautifully described toward the end of the novel: “He was an outsider here in an even deeper sense that in the market town. He had come to realize that Elijah Hanson had called him in only for the look of things… had there been a way of taking care of this business themselves, the community would have done so. He found it unsettling – not their suspicion, which was really commonplace enough – but the sense that he was not really needed, that his version of the law was a mere veneer. Civilization applied as a thin whitewash to the village walls.”

That’s the essence of this book. The law, in the form of London murder detectives, had come to the countryside, but the country dwellers are resisting change and the ways of the past have such a strong pull. I’ve seldom read a novel that was more unsentimentally heartbreaking, and the illumination of the British countryside in 1928 was totally fascinating. This is a lovely little murder book.