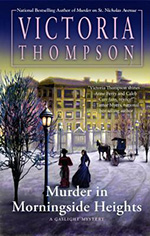 It’s been awhile since I checked in with Thompson’s midwife character, Sarah, and I was a bit surprised to find her married, wealthy, and an unwilling lady of leisure. Like her sister character Molly Murphy, the leisured life is not going to suit her for too long, and she’s in on Frank Malloy’s first case as a private detective. This series is set in turn of the century New York. Malloy had been a policeman; at the time, the police were far more likely to investigate a case involving a reward. Malloy, knowing the ins and outs of the police department, is almost a step ahead as he works on his own.

As the book opens, he meets the grieving parents of a young woman killed at the Normal College in Manhattan, where she had been a teacher. There is no apparent motive for the crime – the young woman had been stabbed to death in a gazebo on the peaceful campus – and everyone is agreed that the dead Abigail was exceptional in every way. Undeterred, Malloy heads to the school determined to interview Abigail’s students, colleagues and the two lady professors she shared a house with. Helping him to unwind things is Sarah, who some of the ladies are more willing to talk to than they are to the gruff Malloy. The two ladies Abigail had lived with – Miss Winters and Miss Billingsly – seem to be divided on their view of Abigail: one liked her (Miss Winters) and one disliked her (Miss Billingsly). Helping to clarify matters is the maid Bathsheba, successfully approached by Malloy on a wash day.

One of the things highlighted by a novel set in the past is the different way people were treated at different times – at the time, it was puzzling to many of Abigail’s friends that she preferred to work and study rather than marry (married teachers could not get jobs).

It was also considered odd and slightly scandalous for single women to room together. The attitude toward pay is also different: women were paid far less than men because it was felt they did not need to support a family (sadly, still an attitude in The Mary Tyler Moore Show in the 70’s). Somehow Thompson never makes the discovery and description of these differences tedious, she instead makes them interesting.

Thompson is a vivid and brisk storyteller; I had forgotten how quickly I breezed through her books and found reading this one to be every bit as satisfying as the first several I devoured. I did miss Sarah’s job as a midwife, but it looks like that skill may be making a return. The mystery part is tricky and I didn’t figure out the motive – there’s a giant red herring used to great effect. Thompson remains one of the more enjoyable reads in mystery fiction.