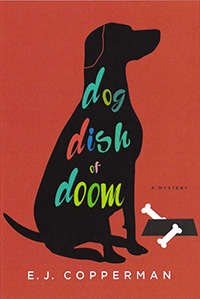 E.J. Copperman – I’ve said this before, and I’ll say it again – is one of the best cozy writers working at the moment. This is the introduction of yet another series from this talented writer, this one about an “Agent to the Paws,” i.e. a showbiz agent who works with animals. Kay Powell lives in New Jersey, sometimes with her aging vaudevillian parents (who are, happily for this reader, en residence in this novel). As the book opens she’s trying to snare a gig for agreeable shaggy dog Bruno to play Sandy in an Annie revival on Broadway. She thinks the audition might be a disaster, thanks to loud remarks made by Bruno’s owner about the ineptness of the director casting the part.

So there’s a good and bad outcome: Bruno gets the part, but unfortunately, his owner is not so lucky. He’s found dead with his face planted in Bruno’s water bowl the day after the audition. Kay makes no pretense to being a detective but she is naturally nosy and loves to gossip, and she’s smitten with Bruno, who, she feels, is not being properly looked after by his owner’s grieving widow. Asked by the police to use her showbiz “in” and report back to her, Kay reluctantly goes undercover.

Thanks to a series of miscommunications, Kay ends up with Bruno sharing her home and taking him to auditions, with his loopy remaining owner alternatively insisting Kay has kidnapped him and agreeing that she can take care of him for the moment. Copperman is expert at creating an entire universe – here, the one of backstage showbiz, infighting, and happy dog ownership. Kay’s parents are really icing on the cupcake – their gigs on cruise ships are starting to dry up and they’re trying to figure out what’s next for them while also being very inappropriately involved in Kay’s life. They’re pretty hilarious and also seem pretty realistically parental.

I think Copperman’s special talent is balancing this kind of normal life with a look at a more specialized environment (here it’s working animals). While there’s a fair amount of caper-ish goings on and of course the death that launches the story, none of it is too upsetting and Bruno is such a sweetie you’ll want to find out his ultimate fate. Great first in a series, and I’m looking forward to more.