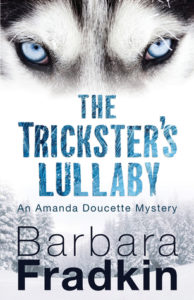 This is a terrifically exciting novel by the always interesting Barbara Fradkin. The second in a series featuring traumatized international aid worker Amanda Doucette, the book opens as Amanda is planning a trek into the Canadian wilderness in the dead of winter, taking along “marginalized” students struggling to acclimate to Canadian culture after fleeing violent situations in their homelands. While the requirement is not that the students be foreign, merely struggling, most of them are from other countries with many Muslims being represented. Amanda’s idea is to build bridges one at a time while sharing a common experience.

As the book opens, she’s unexpectedly cornered by the mother of a student who had applied but was rejected by Amanda’s “gatekeeper” – and Amanda is so moved by the mother’s story about a boy both struggling with addiction and struggling to recover (bringing this to five mystery novels I’ve read so far this year concerning drug abuse), that she goes to her gatekeeper to make his case. Despite being told that he’s trouble, Amanda is willing to give the boy a chance and the group sets off into the wilderness.

She’s delighted to find that the boy, Luc, is a good sport, willing to help out with chores as they make camp. All this changes when Luc disappears a couple days into the trip and Amanda and the guides are afraid of where he’s gone and what might have happened to him. This is like getting two novels in one: the first section is a bravura Nevada Barr style slice of nature writing (and no matter how beautiful the writing, a winter camping trip sounds pretty uncomfortable) and the second, a look at what makes a comfortable Canadian born citizen turn to outside influences for validation. In this case, ISIS.

Fradkin is a great pure mystery writer so she proceeds to set up a pretty complicated scenario, and then brings to it the element of the suspenseful chase. Amanda and her dog Kaylee make good tent poles for this active, involving story, and I was hard pressed to stop reading as I got toward the end. When asked her favorite thing about this book, author Fradkin said “the ending”, and it is a dandy. The sting is in the tail, as they say, and this novel has a terrific beginning, middle and end.