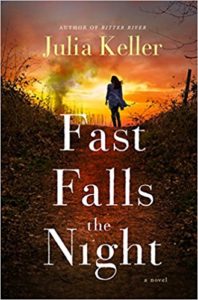 I have a real respect for writers who pull off the feat of condensing a book into the space of a single day. One of my favorite mysteries, Ngaio Marsh’s Night at the Vulcan (1951), takes place in the space of a single night, and while Ms. Keller is far removed from Ms. Marsh in time, theme, setting, and protagonist, they share a knack all good storytellers have. I think it’s a matter of pacing, the right amount of being invested in the characters, and some sort of indefinable magic. Marsh’s stories are lighter and more optimistic than Keller’s, who sets hers in a far more brutal time and place.

It’s sad to think that 21st century West Virginia is more brutal than post-WWII London, where Marsh set her novel, but there it is. Keller’s central character, prosecutor Bell Elkins, is weary: weary of her non-stop job, and weary of the opioid crisis that’s overtaken her little town of Acker’s Gap. As the novel opens, there’s an overdose in a gas station bathroom and things go from bad to worse as overdoses and fatalities pile up, apparently from heroin laced with another, even more deadly, drug.

Balancing theme with narrative impetus – something that’s aided by the short time frame – Keller’s book is never didactic or preachy. She gets her message across just fine by showing, not telling. It’s clear the overtaxed law enforcement, paramedic and medical personnel can’t respond to every crime. They have to overlook the small in favor of the big and as overdoses pile up, it’s all they can do to keep up and simply react.

Keller isn’t a storyteller without complexity, however, and within the pages of this novel are Bell’s character, working relationships, family and romantic life as well as the story of a young officer named Jake. His possible romance, his life and the way he puts the pieces of the drug stories together take on an almost epic turn within the tight confines of this well paced and constructed novel.

There’s a tight balance in this book between message – the opioid crisis, or the “Appalachian Virus”; narrative, and character. Significant events take place in Bell’s life as well as Jake’s but they are wrapped up in the story, and that’s as it should be. Novels are stories: the characters keep us invested, the prose speaks to our hearts, and the situation (in this case) breaks them. I’ve loved all of Ms. Keller’s books, but brutal as this one is, it is probably my favorite, a true achievement of style and substance.