Note: if you aren’t completely up to date on the Lady Georgie series, this review does contain some spoilers. If you skip it, rest assured this installment is just as much fun as all the others. 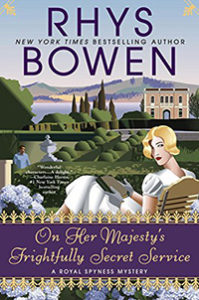 Rhys Bowen’s Lady Georgie series is about the most fun you can have “between the covers.” Ever since the publication of Her Royal Spyness (2007), Bowen has trod the delicate line between humor, character development and great plotting to provide one of the more completely enjoyable series in the mysterious universe. Lady Georgie, for the uninitiated, lives in 1930’s London and is 34th in line to the throne. She’s impoverished but does get assignments from the Queen to do a little “family” spying – at the time, Queen Mary’s greatest worry was the Prince of Wales’ relationship with Wallis Simpson.

By this installment, Georgie is engaged to the dashing Darcy and happily spending time with him at the family castle in Ireland when he’s called away on a mission (he is a spy). At loose ends, her troubles are apparently over when she gets a pleading message from her dear friend Belinda who is waiting out an unwanted pregnancy in Italy. She stops by the Palace on her way to Italy to have tea with Queen Mary and request a release from the line of succession so she can marry Darcy (he’s a Catholic and he’s Irish). When the Queen finds out where she’s going, she quickly asks Georgie to join a house party at a villa near her friend. The Prince and Wallis will be attending, and the Queen wants to know if Wallis has obtained a divorce.

A good bit of the humor in the books comes from Georgie’s troubles with her maid, Queenie, who is hopeless at ironing, hair, make-up – all the things a ladies’ maid at the time was supposed to be an expert at. But there’s something endearing about Queenie. She’s found a berth with a cousin of Darcy’s in the kitchen and it seems to be suiting her, so Georgie takes off, maid-less and unchaperoned (to the Queen’s horror) to the continent.

Arriving in Italy, it takes some time for her to track down Belinda, who has taken up residence in a Swiss clinic. Georgie eventually makes her reluctant way to the house party, which is hosted by an old boarding school friend who has married really well. The house party appears to be made up of wildly disparate people, including several German officers (it’s 1935 and Hitler is in power), as well as Georgie’s mother. Never very maternal, her mother is nevertheless strangely delighted to see Georgie and asks her to help her out of a spot of blackmail.

Of course, there’s a murder as well as a frighteningly efficient ladies’ maid named Gerda who is on loan from the mistress of the villa. The light tone is kept throughout and as is usual with a Lady Georgie book, I was often laughing aloud as I read. All is resolved at the end and it seems we happy fans have a wedding to look forward to in the next installment, and possibly three of them. If you want to know who the other two weddings belong to, you’ll have to read the book!