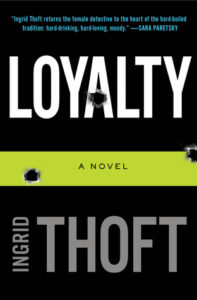 I have heard the buzz about Ingrid Thoft for awhile now and finally got around to picking up this first novel in her series, and boy, is the hype justified. The central character, a female P.I. who works for the family law firm, bears some similarity to the kick-ass Kalinda on The Good Wife, one of my all time favorite TV characters. Josefina “Fina” Ludlow also has a passing resemblance to Spenser, and as this series is set in Boston, that seems only right. The family law firm is run with an iron fist by her father Carl and staffed by her high powered brothers. While Fina found the law wasn’t for her, she found investigative work was. It’s very much put to the test in this first outing. She runs a business “separate” from the family law firm, but they bring her most of her clients.

Unfortunately, her skills are needed when her sister-in-law disappears, and while her brother seems not that troubled by her disappearance, Fina increasingly is, and the outcome (this is a mystery novel, after all) is predictably tragic. When her brother becomes the prime suspect in what’s pretty clear is a homicide, Fina is also trying to help out her now-grieving teenaged niece who is resisting all attempts at either help or emotional support.

“The next hour of canvassing was like a greatest hits tour for the worried well. Yoga, Pilates, massage, energy healing, and Rolfing specialists occupied space next to an optometrist, nutritionist, and a variety of MDs. You could have your aura checked, get your spine realigned, and have a colonoscopy, all without moving your car.”
― Loyalty, Ingrid Thoft

There’s a parallel story involving a businesswoman whose business, it becomes clear, is that of a high class madam. The madam is dealing with an incapacitated husband and a son who has moved back home because of a trauma that’s only identified later in the novel.

Thoft’s brisk, entertaining, matter of fact and frequently humorous storytelling style makes this novel a great read. Her skill at weaving together disparate plot threads is indeed reminiscent of the great Robert B. Parker. She also grounds and creates her character and the entire Ludlow family, setting the stage nicely for future installments, of which I hope there are many. This is a fantastic series.