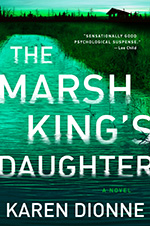 Every once in a while you read a book that’s so good, you can’t look up until you finish, and it’s so clear and specific and moving that you know it’s the book the author was meant to write. This novel, set in Michigan’s Upper Peninsula, is indelible in every way: setting, story and character. Dionne frames her novel with Hans Christian Anderson’s tale The Marsh King’s Daughter, and opens with a woman named Helena relating, in first person, that she’s a kidnapping survivor.

The scenario seems all too tragically familiar – Jaycee Dugard, Elizabeth Smart, even the movie, Room – but as Dionne fleshes it out it becomes very much her own story. Helena is the product of an abduction. She grew up in a remote area of the UP in a tiny cabin with only her mother and father. As it’s the only life she knows, it takes her a long time to puzzle out quite what’s wrong about it.

But flash forward to when Helena is a grown, married woman with two daughters of her own, and she learns that her father, the “Marsh King” of the title, has escaped from prison. When the cops show up on her doorstep at the same time as her husband, who has no idea of Helena’s backstory, his first impulse is to get the girls in the car and get out of dodge. Helena refuses to go with him – this is her quest, but she fears she’s lost her husband forever. Trust is not a concept she’s familiar with, and as the story evolves, it’s clear why that’s the case.

The story weaves together the past and the present, so we learn of Helena’s childhood where her mild mother was very much a background figure to the devotion and kinship of Helena and her father as he teaches her to hunt and survive in a remote area with no running water, electricity, or any means of communication. Everything the tiny family has is a product of their hard work, from the leather Helena’s mother softens and makes into gloves and hats to the snowshoes made by Helena’s father. Helena’s only frame of reference for the world are an old stack of National Geographics.

In the present she’s hunting her father in the wilderness they both know so well, and it’s clear that while he’s an expert woodsman, so is she, thanks to his training. They are lethal equals, and Helena’s task is made more urgent when she starts finding bodies.

In the past, while the young Helena clearly loves her father and loves the things he teaches her, she’s also subjected to beatings and punishments (being locked in a well, for example) and her mother is basically being raped every night, with Helena being a product of a rape. These things are only clear to Helena as she gets older, however – when she is a young girl she holds her mother in contempt.

This story could be set nowhere else but the UP, and Dionne is an amazingly evocative and vivid writer describing her setting. While I grew up in Michigan and spent my summers “up north,” entering the UP always felt like I was going to a different country, and Dionne is expert in portraying that feeling.

As Helena grows older and becomes ready, naturally, for the next phase of her life, her growing rebellion and strength makes her father angry and leads to a showdown. As the two of them in the present race toward one another for another show down, it puts this intimate story on an almost epic scale. Everything about this novel is perfect: the writing, which is not too flowery but is memorable and clear; the characters – Helena and her parents will stay in my mind for a very long time; the vivid setting, and finally, the story that doesn’t let up. If there’s a better novel written this year I would be very surprised. Don’t miss it.