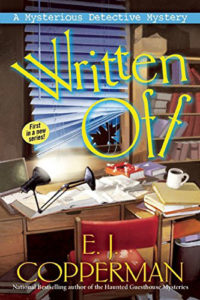 E.J. Copperman, Jeffrey Cohen’s alter ego, has written, as either Copperman or Cohen (or both) now five series (with a sixth to debut in August of this year), all of them well crafted and enjoyable, and two of them, his Asperger’s detective series and this one, ranking among the very best cozy series ever, in this humble reviewer’s opinion. For me the apex of cozy begins with Charlotte MacLeod, spreads quickly to Sharyn McCrumb’s peerless Elizabeth McPherson series, and trickles down to include writers like Dorothy Cannell and Donna Andrews and continues onward from there. There are many contemporary cozy series I both admire and enjoy, but Cohen/Copperman is top of the pile.

Like Cohen’s Asperger’s detective series, this one – he’s calling it the “Mysterious Detective” series – has an insanely great set-up. The main character, Rachel Goldman, writes cozy mysteries featuring a detective named Duffy Madison, who works as a consultant to a prosecutor’s office. One night, as Rachel is at a book signing, a man turns up who says he is Duffy Madison. Not only does this Duffy Madison hold the job Rachel created for him in her books, but he appears to have sprung into existence four years ago – the same time Rachel’s first book was published. Rachel (and her bookstore friends) thinks he’s nuts, but he insists he has an important case he needs to discuss with her, and reluctantly, she agrees.

The case involves two dead mystery writers and one missing one, and ever so reluctantly Rachel is drawn into the story, especially as it seems she might be next on the killer’s list. Cohen/Copperman, after so many books and series, is really top of his game as a pure mystery writer – plot, setup, clues, suspects – all expertly and enjoyably handled. Oh, yeah, he’s also very funny, which in a cozy series, is seriously important. Sure, it’s a bit meta to have the main character be a mystery writer and the detective a character she’s actually created, but this book has a lovely energy, focus and narrative drive that just can’t be beat. And like the very best mystery stories, this one ends with a little cliffhanger for the next book. Seriously, if you love cozies or just funny, well written mystery novels, don’t pass this one up.