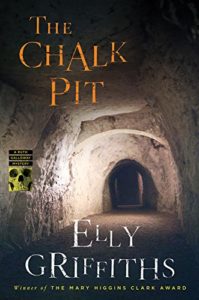 This is a wonderful outing from Elly Griffiths. I enjoyed the last one, The Woman in Blue, very much, but my daughter pointed out after she read it that it was “transitional.” I asked her exactly what did that mean, and she explained the characters were all in transition, neither here nor there for that particular installment. Thinking about it, I agreed with her completely, and this one – where the characters seem to have found landing spots for the moment – feels like a stronger book.

In it, Ruth and Nelson have gone to their romantic corners – Nelson is back with his wife and Ruth is alone. Cathbad is settled (and regrettably, not much in evidence), Tim is gone, Cassandra and Clough are happy parents, and Nelson has a new boss. He thinks to himself “Yes, not content with giving him a tangled love life and a stressful working life, God has now delivered the greatest blow of all. Nelson has a woman boss.”

Nelson is no sexist, far from it, but Jo, his boss, is portrayed by Griffiths as a kind of eager combo hipster/new age hippie who tries to meet each employee on their own terms and fails miserably. Not since the great Ngaio Marsh has a writer been so deft at swiftly explicating a character to such great comic effect, though it’s more of a gentle drubbing than a sharply cruel one. This is the kind of thing, among others, that sets Griffiths’ novels apart – the sharp clear humor of her writing and world view shines through on every page.

Ruth, meanwhile, has been asked to consult on an underground site for a possible future restaurant where bones have been found. Archeologist Ruth is to determine whether they are old or new, which, if they were new, would halt any possible construction. These novels, set in Norwich in the UK, always include a swath of history as well as the local landscape. In this novel, with constant references to “going underground” and underground societies – there’s even a character named Bilbo – the local landscape, it becomes clear, is composed of chalk, and there are countless underground tunnels connecting much of the city.

Like another author I very much admire, Deborah Crombie, the whole situation created by Griffiths is so enjoyable that when crime eventually intrudes it’s almost jarring, but intrude it does, as homeless men are found stabbed, a homeless woman disappears, but it’s not until a housewife and mother of four goes missing that the investigation really heats up.

Griffiths is enough of a traditional mystery writer that she includes a red herring or two, but she’s newfangled enough that her characters are so indelible they seem absolutely real. Ruth Galloway is certainly one of the greater creations in mystery fiction in the last decade or so. Her human foibles coupled with her strength and intelligence, not to mention her status as a single mother, make her seem so “real” it would not be at all surprising to meet her in the flesh. What an achievement!

And so is this book, which ends with a breathtaking chase and capture that’s made more memorable by a few reveals about the characters as well as some tying up of personal loose ends for some of them. This is absolutely one of the best mystery series being written at the moment.