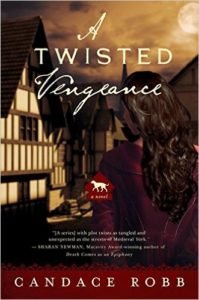 The second novel in Candace Robb’s Kate Clifford series finds the feisty Kate dealing with her mother moving in next door, bringing along with her some “beguines” or women who live a religious life but not in a convent. They devoted themselves to charitable work. Kate is wary of her Mother’s newfound earnest faith and of her mother in general, and with good reason, as Robb teases out more of Kate’s family backstory throughout the book.

Kate has an assorted household that includes a giant, earless baker and former soldier, Berend, and two wolfhounds who accompany her everywhere. She also has a tumble of children, none of them hers, but all of them with ties to her family. She loves them all and it makes for a busy, active household.

The year is 1399, and Kate lives in York, so she’s right in the middle of a civil war – a conflict Robb does not overly impose on her story, but instead makes it a reason for the uncertainty, violence and chaos that shroud the city. Like a good noir novel, no one can be trusted, which makes Kate’s detective work all the more difficult. I’ve always thought of Robb as an historical novelist, certainly, but she also owes a debt to her fellow West Coaster Ross Macdonald, with his dark look at families and general noir viewpoint.

The book opens with one of the beguines being dragged out of bed and violently attacked – she’s recovering but won’t speak – and somewhere, there’s a man she’s stabbed. When the body count rises, so do tensions, and the central narrative thread lies between Kate and her mother. Their wary coming together is the story of this strong, emotionally moving novel, and the action scenes are pretty terrific too. Kate wields a mean arrow.