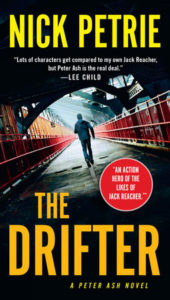 While I am not very interested in the mechanics of violence—i.e., action scenes—Petrie is pretty good at them. This lean, mean, stripped down novel about an Iraqi war vet with serious PTSD grabs you from the start as he climbs under a porch to remove and subdue a large, smelly and hostile dog. It’s unclear why he’s under the porch, who the little boy on the porch is, or why exactly he has to remove the dog, but as the book progresses the whys and whos come into focus.

It becomes clear that the main character—the drifter of the title—Pete, is living in his truck because he can’t bear to be indoors and he’s repairing this particular porch because it belonged to a fellow vet who committed suicide. He feels he let his friend down and is trying to make it up to him.

While he’s working, he finds a suitcase full of money and plastic explosives under the porch, and the question becomes—did it belong to his friend? Does the wife know about it? Does anyone else know about it? Some sinister questioning from a man with a scarred face who happens to drive by the house puts a rest to that question.

It becomes clear who the real couple in the book is early on: Pete and the dog. To get the dog out, he’s tied a stick in his mouth so he can’t bite, but as Pete hand feeds him and lets him sleep in his truck they become friendly and eventually one of the more pressing questions I had when reading this compelling thriller was, when was Pete going to give the dog a bath?

As the plot threads tighten and Petrie uses some clever sleight of hand to reveal the identity of the criminal mastermind behind the money and plastic explosives, it’s hard to stop reading this book. It’s well written and well constructed, and Pete and the dog will stay with you long after you finish reading.

We had Petrie’s professor in the store for an event and he bought one of Lee Child’s books, as he said Nick cited him as an influence. The professor seemed confused by this. No mystery reader will be, however. Pete has threads of Jack Reacher hanging all over him. This is a terrific debut.