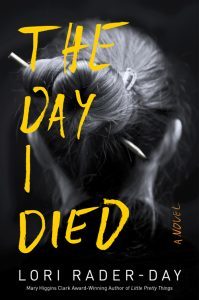 This is one of those thrillers that gets inside your head and leaves you thinking after you finish it. Lori Rader-Day’s book isn’t as much terrifying as psychologically detailed and often heartbreaking—which is the kind of thriller I like. The main character is Anna Winger, and the book opens with the chilling scene of her “death.” And while what she’s doing can be called “living” you might beg to differ.

Because of fear (she’s hiding from someone and it’s pretty clear early on that it’s probably an abusive husband) she’s made her life as small and controllable as possible. She’s a handwriting analyst at a very high level—she can basically work from anywhere, and she has a contract with the FBI. She lives in a tiny podunk Indiana town with her son, Joshua. Joshua is 13, so he’s doing his best to make his mom’s life hell.

As you read, you’re kind of on the mom’s side, here—the kid is definitely hanging with the wrong crowd, lying about skipping school and ultimately, disappearing. But I think a really good writer can show both sides. Sure, the kid is up to no good, but on the other hand, his mom has made him move with such regularity he has no friends, she is out of contact with any kind of family—and he’s starting to ask—and the kind of claustrophobia most 13-year-olds feel being stuck with a parent at breakfast must really be nothing compared to being stuck with only your parent all the time.

But as Anna’s carefully constructed world begins to become unglued, she must change. She’s called in by the local sheriff to consult on the case of a missing toddler (everyone assumes the mother is the guilty party, and Anna is not convinced) and she’s asked by a neighbor for help. Her world is beginning to crack and let other people in. When her son goes missing, she’s all in—she has to go back and confront her past.

I think one of Rader-Day’s strengths as a writer is the unexpected in terms of character. She’s not writing in black and white but in shades of grey. With the exception of the ultimate villain, you can kind of see everyone’s point of view to a degree. I also loved the handwriting analysis portions of the book—they gave Anna an excuse to be involved and they give her extra insight. Even the doubtful sheriff begins to come over to her side.