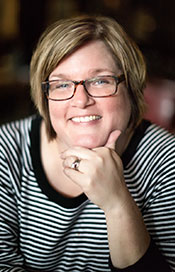 When you read Lori Rader-Day’s new book, The Day I Died, it should be obvious why she’s regarded as an up and comer. Her first two books, The Black Hour and Little Pretty Things, garnered plenty of attention and award nominations. This one stays with you long after you finish reading it – and Lori was nice enough to answer some questions about it.

Q: I saw in the back of this book that you’ve been thinking about writing it for 10 years. What part of this story came to you first? What compelled you forward to work on this for 10 years?

A: I didn’t think about writing it for ten years. Over the course of ten years, I wrote it! It was a short story in 2007; by 2009, it was a full novel draft. The problem was that I was not yet a novelist. Writing that draft taught me all the pitfalls of novel writing. When I put it away and started what became my first published book, The Black Hour, I was so much more comfortable with the process and the shape of a novel-length project. And then I wrote my second novel, Little Pretty Things. After that, I had to decide what came next. I could have let the draft of what is now The Day I Died languish; it wouldn’t have killed me to let it go and write something new. But I felt as though the problem with that draft hadn’t been the story or the character or the set-up, but me. I hadn’t been a skilled enough writer at the time I attempted that book. I wanted to give that story and that character a chance.

Q: Did you always know you were a mystery writer, as opposed to some other type of writer?

A: I had to be told, actually! In 2008, I won a fellowship to a retreat hosted by Midwest Writers Workshop. When I arrived, I found I had been placed in the mystery group, as opposed to the fiction group. It was the best thing that ever happened to me. Before then, I had no idea what I was writing was a mystery. The instructor of our group at that retreat was Terrence Faherty, who showed me the direction I should go, and he saved me a lot of wasted time. He told me about Bouchercon, which was in St. Louis in 2011, which is where I joined Mystery Writers of America and really started getting involved in the mystery community.

It shouldn’t have surprised me to be put in the mystery group. I had always loved reading mysteries—I just hadn’t ever tried to write one. Not on purpose, anyway.

Q: I have noticed, having met several people who write scary psychological thrillers, as you do, that they seem to be especially empathic. What is it, do you think, that allows you to put yourself into a situation you yourself may not have actually experienced?

A: Empathy is a particularly useful writer’s tool, so the best writers of any genre are probably empathetic. We also use our own experiences to fuel our stories, even when the plots have nothing to do with our lives. We use our memories of experiences to give our characters their experiences, which then gives the reader hers. For instance, in my first book The Black Hour, the main character had been injured in an act of campus violence. I heard from many readers that they thought Amelia’s pain was real. One book club reader who had chronic pain herself said I got it right. But I’ve never been shot. Nor do I want to do the research. I used my own recovery from having my spleen removed (long story) to give me those pain details. I’ve never been the victim of domestic violence, but can I imagine betrayal by someone I should be able to trust? Of course.

Q: I was interested throughout the novel in how you talked about the main character making her world smaller and smaller. Was this something you especially wanted to explore?

A: Her world starts out the smallest it has ever been. When we meet Anna Winger, she is leading a narrow job centered around her son and her work. All other distractions have been blocked out. Throughout the book, though, she starts to connect: to her neighbor, to the mentor who helped her get started in handwriting analysis who she’s only met in person a few times, to the sheriff who seeks her help now and other members of her new community. I wanted the help Anna gives to the sheriff to take her to a place where she has to change, to where she has no choice but to let others in.

Q: One of the more interesting parts of the book is the fact that the main character is a handwriting analyst.  How did that profession present itself to you, and how much do you know about it?

A: I discovered handwriting analysis at a library. I was there trolling for inspiration for a new short story and found it. I’m no expert myself, but I used some research to fill in the gaps and to extrapolate what Anna needed to notice throughout the book. Once I figured out that Anna would be paying attention to every shred of handwriting she could find, I had fun with inserting more chances for her use her expertise.

Q: Does this book feel different to you than other books you’ve written?  Do you feel you grow as a writer with each book?

A:I hope that’s what is happening, though growing as a writer doesn’t necessarily mean that the writing gets any easier. In some ways, it’s more difficult. You expect more of yourself and so do other people. The Day I Died is different in that it’s about a mother, something I am not. My approach, of course, was very different. In the end, what I was hoping was not so much that this book would be different but that it would be the same. Since I wrote it first, I was worried it wouldn’t be what my readers had come to expect from me.

Q: What mystery writers (or other kinds of writers) have influenced you?

A: My early favorites were Beverly Cleary, Judy Blume, and Lois Duncan. Of course as soon as I discovered Agatha Christie and Mary Higgins Clark, it was all over for me. I also love writers like Annie Proulx (The Shipping News), Michael Chabon (Wonder Boys) and T.C. Boyle (World’s End). My favorite crime novels of all time are Harper Lee’s To Kill a Mockingbird (yes, it is) and The Thin Man by Dashiell Hammett.

Q: Can you name a book that was a “transformational read” for you? One that turned you on to reading, or changed your life as a reader or writer?

A: I was always a reader, but the writer who made me want to be a writer first was Beverly Cleary. Ramona forever.

A: I’m revising my next novel for William Morrow for release in 2018, an as-yet-untitled murder mystery that takes place in a dark sky park—a place kept free of light pollution so that visitors can see the stars the way nature intended. It’s set in Michigan, as a matter of fact! I borrowed the very real Headlands park up near Mackinaw (City, ed.) but changed some details and names. I’ll soon be striking out on a new story but haven’t decided what that will be yet.