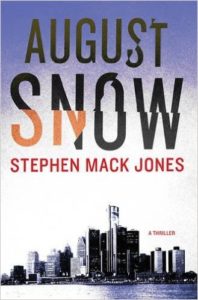 As I started this book I have to admit I was a tad suspicious – the author is a poet and a playwright, not always the recipe for creating a down and dirty private eye novel. But as I read this novel set in Detroit’s Mexicantown and featuring half African American, half Mexican ex-cop August Snow, I found instead that the book fitted neatly in with work by Loren Estleman and Steve Hamilton, being a refreshingly straightforward, if gritty, private eye novel and making no bones about it.

Like David Housewright’s Minnesota P.I. Mackenzie, who has a ton of money at his disposal, so does August Snow, who won a settlement against the Detroit Police Department and is using the money in his own way to recreate the warm Mexicantown neighborhood he fondly remembers from his childhood. He’s been on the run – more or less – for a year and is back home, settling into his life in Detroit, when he gets a call from an old client, one who helped cause much of the ruckus that got him on the outs with the Detroit cops. Reluctantly, he makes the trek across town to the woman’s Grosse Pointe mansion to see what he can help her with.

He turns down her request to look into possibly shady happenings at the wealth management firm and bank she owns, but when she’s discovered dead shortly after they’ve talked, August, being the true white knight private eye hero, thinks there’s something wrong about her apparent suicide and can’t get it out of his head.

The back and forth of the street characters and hackers August deals with, contrasted with the ultra wealthy banker types, creates a good back and forth dynamic as the book unfolds. And even the name of this detective – August Snow – summer, winter, two opposites in the same name – helps define the way he’s able to straddle the street, the FBI and police and his wealthy clients.

I thought this book took a bit of time to get warmed up – as though Mack Jones was finding his footing and establishing his bonafides, but once he gets rolling, this is a wonderfully plotted P.I. novel, full of action and great characters. As readers we also meet the one of the few African American private eyes on the scene, so this is a welcome book and I hope the start of a series. There just aren’t enough books like this one being written at the moment.