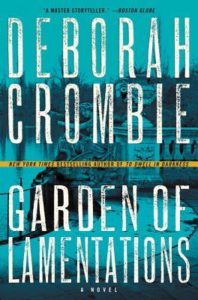 I look forward to few novels more than I do those of Deborah Crombie, whose Gemma James/Duncan Kincaid books have become one of my favorite series. As the series has progressed and the working partners became marital ones, I also have become a fan of these characters who are good, decent human beings dealing with life as it comes at them. They are a family of five with all the chaos that entails and juggling family and work is not always easy. In this novel, Gemma and Duncan seem a bit estranged.

Originally, the two worked together, with Duncan outranking Gemma, but now they are equals in rank and they no longer work together. In this novel, as in the previous several, each one has their own case they are pursuing and the two don’t mix. Crombie, who obviously is a big fan of order and structure, is able to nimbly navigate this complex plotting structure with ease.

Gemma’s case concerns a nanny who was found dead in the private, shared garden behind the house where she lived and worked, so in this scenario, Crombie creates a locked room mystery of a sort as Gemma and her temporary boss, Boatman, who has requested Gemma as she has a tenuous personal connection to the victim. This story really captivated me as Crombie delves into the lifestyles and personalities of the families surrounding the garden area. For those not familiar either with London or the movie Notting Hill, the garden is a fenced, locked one, accessible only to the neighbors whose houses back up to it.

Duncan’s case is more complex and has threads tied to the past several books, and involves police corruption at the highest level. Duncan is mostly working in the dark as he tries to figure out why his old boss, Denis Childs, who had disappeared and reappeared, requesting a meeting, and who warns him to be careful has given him this warning. Duncan is worried and doesn’t share his worries with Gemma, thus straining their relationship, and when Childs is conked on the head and is in an induced coma, Duncan is really on his own.

He gets to work with his old mates, Melody and Doug, on the sly, as they use their various skill sets and connections to figure out what’s happening. In the last book, the story was set off by a bomb blast in St. Pancras station. Melody was a witness and it’s clear she is probably suffering from PTSD. A working knowledge of that novel (The Sound of Broken Glass) helps to navigate this one. The wrap-up of both cases is both satisfying and surprising.

Crombie is at all times a complex, intelligent writer, who uses her rich characters and settings and complex situations to create truly memorable novels. She weaves her stories back and forth through time in some cases (Duncan’s, here) and interweaves her different plot lines, integrating them with the character’s personal lives. This is the bravura work of a master of her craft.