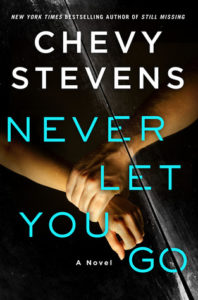 When Robin asked me to write a review of Chevy Stevens’s new book in advance of Chevy’s appearance at the store, she wondered if I’d have to reread the book in order to refresh my memory. But, despite the fact that I’d devoured Never Let You Go  back in early September, and have read many mysteries since, the answer was an emphatic no. Believe me, consuming one of Chevy’s books is such a powerful and enthralling experience that you’re not going to forget it anytime soon.

In a thriller the initial setup is crucial, and as usual in her work, Never Let You Go has a compelling hook that lands the reader into her hold. There are two lines of narrative, one told in the voice of Lindsey in 2005, a young and somewhat naive wife trapped in an abusive relationship. At a vacation resort her Machiavellian husband Andrew pulls a power trip that endangers their daughter Sophie, making Lindsey realize once and for all that she and Sophie must escape from him.

Flash forward to 2016 where Lindsey and Sophie have rebuilt their lives on an isolated Canadian island. Unfortunately Andrew has gotten out of prison, mysterious and vaguely menacing things have started to happen, and the drastic measures Lindsey used to get Andrew incarcerated in the first place haunt her in more ways than one.

As we learn how she escaped from her previous hell we also see the fresh one developing around her. Then there’s the narrative from teen Sophie, who doesn’t really remember her father, has been surreptitiously corresponding with him in prison, and is rebelliously sympathetic to his attempts to forge a relationship now that he’s out.

The result is very hard to put down. Stevens knows how to twist a plot without tying it into implausible knots and the unexpected ending makes you wonder how you didn’t see it coming rather than filling you with a desire to throw the book across the room. In a thriller landscape infested with zombie Gone Girl on the Train clones, she stands out because of the deep humanity of all her characters, as well as the sincere empathy she brings to even the most horrifying scenarios. The result is a book that is sensational without being sensationalistic, one that, like many classic “women in peril” mysteries, is, in fact, a commentary on the relative powerlessness of women in society. You’ll race through Never Let You Go, but it will reverberate for a long time. (Jamie)