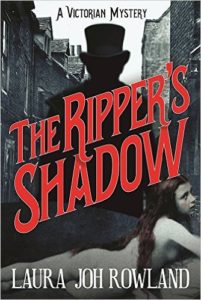 Laura Joh Rowland is well known to mystery fans as the author of the Sano Ichiro mysteries set in 17th century Japan. She’s also taken on Charlotte Bronte in other novels, and here she creates a new character, photographer Sarah Bain, who lives in Victorian London at the same time as Jack the Ripper. While there are many, many books about Jack the Ripper—the fact that he was never found will always be fuel for speculation—he’s almost like Sherlock Holmes in that the permutations and impressions of his life (and crimes) are varied and plentiful, and the interpretations can range from the dull to the nutty to the creative. Rowland goes for the creative.

She creates a central tent pole character who is interesting, flawed, and human at the same time. Sarah is a female photographer struggling to make ends meet on her own, and has found a path to success taking naughty photographs of prostitutes. The photos were the idea of one of the women, but when the women start to die at the hands of the Ripper, Sarah feels her photographs are the reason why. Interweaving fact and fiction, Rowland of course posits a solution to the crimes, but that is almost a McGuffin. To me the real interest of the novel lay in the characters which Rowland chooses to surround Sarah.

They are a varied and disparate lot, yet they seem to have a common thread—some horrible, painful pasts or innate character traits that make them societal outliers. There are the Lipskys, who Sarah meets when she goes to photograph their dead child; Jews expelled from Russia, their painful past can almost be assumed. There’s young Mick, who cadges his living on the streets but takes a liking to Sarah, who ends up feeding him on a pretty regular basis. There’s the dashing Lord Hugh whose secret is that he prefers men to women; in Victorian London, of course, this was an illegal lifestyle choice that could result in prison. And finally there’s the lovely actress and model Catherine, who has posed for Sarah and who the little band unites around in a kind of protective custody arrangement.

As this group searches for the Ripper, Sarah is afraid to reveal the reason for her alarm to the police, fearing her photos could get her arrested. As she hides this essential fact she becomes a target of the investigation herself and finds a frenemy in one PC Barrett.

As Rowland takes the reader on a tour of many of the seamier parts of London, you can almost smell the city as Sarah and crew take their stations in the fog, protecting prostitutes and hoping to catch the Ripper. Sarah’s lonely present is assuaged by her new band of companions, and it’s the growing friendship between all of them—as little bits of their pasts are teased out throughout the narrative—that give this novel real charm. It certainly felt to me like it was set up for a sequel, and I hope it is, as these are characters I hope to revisit.