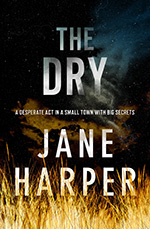 Two things to keep in mind when reading The Dry:

This is a wonderful first novel, featuring Melbourne financial detective Aaron Falk, who has returned to his tiny hometown of Kiewarra for the most tragic of reasons: his boyhood friend, Luke, has apparently killed his wife and toddler son in a murder-suicide. Aaron has gotten a note from Luke’s father demanding his attendance at the funeral. As he arrives, it’s like he’s walking into a terrible steam bath. Harper wraps the suffocating heat around him like a blanket and he’s plunged into the tiny church where the funeral is being held, surrounded by his long ago neighbors and frenemies.

Kind of like the frog in the water that’s boiling but doesn’t realize it until it’s too late, Aaron eases back into Kiewarra despite some terrible past memories and the fresh new grief of losing his old friend Luke. In a room over the pub he’s visited by the local cop in charge, who asks him to unofficially look into the case with him, as he feels something is off.

Unlike many contemporary detective novels, neither Aaron nor the local, Raco, are the tormented type. Yes, Aaron has some baggage that makes him a bit standoffish, but he and Raco are both are at heart good, decent men who want to discover the truth because that’s what’s right. This is almost a western, and they may as well be wearing the white hats of the good sheriff.

This novel is far from corny, however, and Harper uses the setting—the dry, hot landscape—to her advantage as she tells her story, winding it in as part of her plot. That’s a trick only some of the very best writers can pull off (Kent Krueger and Julia Keller both come to mind) and Harper is a very powerful writer. As she interweaves the past and present, creating an incredibly painful backstory, she’s also laid the groundwork for a true mystery with a solution that is a surprise in one way and in another way, it’s not, as she’s set it up so well.

I often feel mysteries can get away with a good story and decent characters. That’s a good read. When all the elements—prose, plot, setting and character are present—that’s a great read. The Dry is a great read. Don’t miss it.