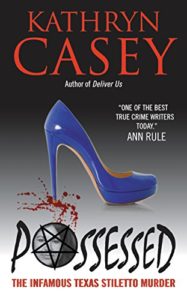 Ever since the loss of Ann Rule, the True Crime world has been in a bit of a funk. To some extent the books that used to come out by the dozens have been replaced by semi-documentaries that proliferate on television. Of course, like so many, these programs suffer from a lack of depth and a questionable “reality” show standard of journalism. So thank goodness for Rule’s friend Kathryn Casey, who with her new book Possessed: The Infamous Texas Stiletto Murder serves up a delectable slice of real life crime, detailed research, twisted personality and plain old you-couldn’t-make-this stuff-up goodness.

The first hook is one you might already be familiar with:

The woman’s face twisted into a pained grimace, and she pointed a bloody finger toward something on the floor near the dead man’s head, a size-nine, cobalt blue suede stiletto, its five-and-a-half-inch heel stained with blood that held tufts of what appeared to be strands of the dead man’s white hair.

The woman is Ana Trujillo, who on June 9th, 2013 killed her former boyfriend Stefan Andersson by beating him over the head with the stiletto heel of her shoe. Casey begins her tale with the shocked first responders, and their quick realization that there’s something a little hinky with Ana’s tale of deadly force in self defense.

The book then rewinds, taking a deep look at the biographies of both victim and killer, expertly detailing their characters, until there seems an almost tragic inevitability that when the trajectories of these two star crossed people intersect something awful will occur.

Stefan Andersson was born in Sweden, blessed with a brilliant mind but cursed with a father who was abusive to his family and jealous of a son who would outshine him. Eventually Stefan escaped to the United States in order to pursue biochemistry in corporate and academic jobs, but he remained damaged, popular and successful, with many friends, yet insecure, uncomfortable with true intimacy and saddled with a bit of a drinking problem. Getting older, with a failed marriage and a string of unsatisfying romances, he longed to shake his life, hoping for, perhaps, a spicy Latina to spice things up. Be careful what you wish for.

Ana Trujillo, a woman whose outgoing nature verged on exhibitionism, had risen from her own humble roots to become, at one time, a successful wife, mother and businesswoman. Gradually, however, perhaps because she had forced to be prematurely responsible at an early age, taking care of her younger brothers and sisters, she slowly slipped into a life of careless hedonism. It was a slow spiral downward into drugs, sex and bad company, her fitful and grandiose attempts at providing for herself regularly ruined by her inability to apply herself to anything but hedonism for any length of time. There were always guys, though, to pay for drinks, crash with and generally pick up the pieces. These relationships would just as regularly be sabotaged by her increasingly unhinged behavior and inexplicable eruptions of violence.

In each, the other initially found a savior of sorts. Only later would it all turn out to be misimpression and camouflage.

When Stefan and Ana met in the lobby of his high rise apartment building he saw her as the missing piece of his life. Even when he learned enough to want to avoid her, he can’t be firm enough to make a clean break or avoid her appeals to his compassion, haunted, perhaps, by the memory of his father’s brutality to his mother. As Max used to say on Hart to Hart, when these two met it was murder.

Once the deed is done the ever manipulative Ana tries to game the system, claiming to be a battered woman who feared for her life. The police and prosecutor soon see through her, but her claims make for a powerful defence in court.

As Ann Rule herself said, Casey is “one of the best true crime writers today,” and Possessed is a truly compelling read, with not only a precise presentation of the facts, but also a novelist’s eye for character and setting, the whole producing one of the best examples of the genre to appear this year. (Jamie)