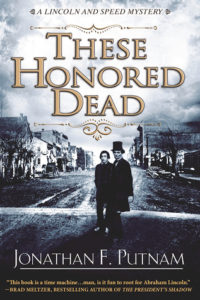 This is a terrific debut novel, set in Springfield, Illinois in 1837. Abraham Lincoln, newly minted lawyer, arrives in town looking for a place to stay. He ends up sharing the bed (a common practice at the time) of one Joshua Speed, who is running the general store in town. Speed and Lincoln became lifelong friends; his brother, James was named U.S. Attorney General by President Lincoln. When this book takes place, however, Lincoln’s presidency is far in the future, though the character traits that assured his greatness are hinted at here.

Speed is actually the main character and that’s as it should be. (I never like novels taking too much liberty with major historical figures.) Lincoln is definitely a part of the story, but he’s more of a background player. Speed is carrying on a romance with a fellow merchant in secret, a widow from a nearby town. While the arrangement suits Speed and he’d like it to continue, she abruptly cuts him off.

Not long after that Speed runs into her and finds she has taken in her niece and nephew as wards; and not too much longer after that, the woman’s young niece is found brutally murdered. Speed is in on the hunt, doing much of the investigative work to clear the woman’s name as she’s suspected of the crime.

A series of deaths find Speed begging Lincoln to defend the person eventually accused of the crimes in the novel (I don’t want to give too much away). They work together quite well, even illustrating how two men with opposing views can be both friends as well as work together. It’s a gentle lesson that’s welcome in today’s political climate.

The mystery part of the novel is pleasantly brisk and suitably tricky. I did tumble on to the solution before the end of the novel, but I didn’t actually care. The real strength of this novel is Putnam’s deft hand at portraying life in 1837 Springfield – a time when Southern Illinois was practically the frontier.

The oncoming economic crash, the hardscrabble lives of the town merchants and farmers, and the vivid portrayal of a community that’s bound together when necessary made this for me a compelling and hard to put down read. I think one of the things that was most interesting to me was the way people shared beds and even plates, as Speed and Lincoln breakfast together and share a huge feast. I was fascinated that there were feral hogs running loose. Putnam even includes an Alexis DeTocqueville style character in the form of a Prussian who comes through town and is forced to stay on for awhile (thanks in part to the hogs.) He’s writing a book about his experiences in America.

Putnam’s portrayal of life on the prairie has an epic feel; and the life depicted in the book has the air of bursting forth and expectancy as a nation takes shape and rumbles to full life. And of course, I can never read enough about Lincoln. Not to be corny, but he’s one of the great things about our country. I was glad to be in his company, as well as that of Joshua Speed. This feels like a series that could have a nice long run.