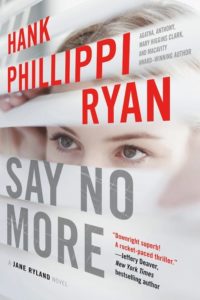 Sometimes the cultural zeitgeist affects writers even more than others, and this year I’ve read several novels addressing sexual violence and even more specifically, the rape culture that exists on college campuses. Jamie reviewed two recent memoirs, The Red Parts and Jane Doe January, involving real cases, and I was captivated earlier in the year by Allison Leotta’s The Last Good Girl. Hank Phillippi Ryan is now joining the fray with her latest, Say No More.

Ryan and Leotta are a fair comparison – both are proactive women who have or have had real life careers where they can make a change: Ryan as an on-air, Emmy winning reporter in Boston, and Leotta as a former sex crimes prosecutor. Both are no nonsense writers who do not mince words, a quality I never fail to appreciate. Both write the kind of thoughtful thriller that keeps a reader turning pages and thinking afterward.

Ryan’s and Leotta’s novels are of course not the same, they just address the same vitally important issue. Ryan approaches it through the eyes of her central series character, reporter Jane Ryland. Jane is in a bit of a betwixt-and-between stage in her life, both in her relationship with policeman Jake (they are engaged, but she’s not wearing her ring) and in her professional life, as she eases back into on air journalism.

To that end she’s working with a young co-worker on a documentary about college rape, inviting victims to call in with their stories, and looking for one she can interview on-air, a difficult proposition. In the “real time” of the story, she and her co-worker have witnessed a car accident and Jane’s recall of the driver puts a tumbling cascade of events into motion.

One of Ryan’s super powers as a writer is to infuse her books with a real heart-on-the-sleeve quality that feels very genuine. While she’s a thriller writer with the complex, intertwining plotting skills of the best of them, her heartfelt way of telling a story and making the reader bond with her characters sets her apart.

I really care about Jane and Jake – I care about Jane’s career. I want to know what’s going to happen. And more importantly, I think, I care about the people she writes about and makes central to her novels. In this one it’s a young woman who goes by the pseudonym of Tosca, and who has called Jane with the details of her story, a giant leap for a young woman who is taking all her classes remotely and refuses to leave her apartment.

As Jane and Tosca make contact and begin to form a bond, it’s also clear there’s a pattern of campus assaults, and it’s somehow tied to the death of a young professor, a death that may or may not be an accident. (This is a mystery novel, though, so you know it’s not an accident).

As Ryan skillfully weaves together the threads of her complex plot I was captured, as always, by the sheer narrative, but I was also engaged emotionally as Ryan examines a culture of rape and an attitude towards women that’s simply unacceptable. If stories like Ryan’s and Leotta’s can begin to affect the way people think, behave and approach a problem, these authors will have, even more importantly than writing a compelling novel, have hopefully actually affected the way people think and behave. It’s a very good reason to spread the news of this book as far and wide as possible.