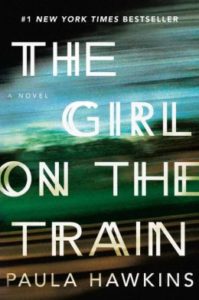 It’s always puzzling to me why a particular book takes off for the stratosphere, and another, equally good, does not, but there’s no denying the popularity of Paula Hawkins’ debut, The Girl on the Train. While I’ve heard Hawkins say in an interview that no one ever thought of a character seeing a crime from a train before (see The 4:50 from Paddington, Agatha Christie, 1957), I have also seen an interview in the New York Times Book Review where she mentions a reverence for Ruth Rendell. There are also articles talking about this novel being responsible for the “re-birth”of domestic suspense, a trend that has always been with us, going back, again, to Agatha herself. All that made me unwilling and uninterested in reading it, but I put it on our book club ballot and the book club picked it, so here I am, having read the most popular novel published in the last few years.

And I won’t say it’s not a compelling read. Much like Gillian Flynn’s hit, Gone Girl, it’s hard to put down or look away from and unlike Gone Girl, I didn’t actually dislike every character in the book (just most of them). Hawkins’ creation of her central character, Rachel, a woman who is obviously suffering from the death of her marriage and loss of her beloved home, a home she can see from the train every day as she travels to work in downtown London. Rachel is apparently slightly overweight (making the casting of Emily Blunt as Rachel in the film somewhat unexplainable); has a drinking problem, brought to all-too vivid life; and an arrangement with a former friend to rent one of the rooms in her apartment which is turning out to be uncomfortable at best.

She comforts herself by observing the lives of a couple on her commuter route—a couple whose life she can see from her seat on the train, and she supplies them with a fantasy life that would be hard for anyone to live up to. When she sees the wife kissing another man one day and then when the woman subsequently disappears, she’s drawn toward the case like a moth to a flame and even finds herself being questioned by the police.

Hawkins uses a back and forth through time method of telling her story, so that Rachel’s whole story emerges in bits and pieces and the other players in the story become all too frighteningly intimate. While Rachel is somewhat of an unreliable narrator—she drinks to blackouts—she also seems, all along, to be a kind person, and you want to give her the benefit of the doubt. Like Flynn’s novel, Hawkins’ novel actually relies on very few characters but their stories are all told with a vivid intensity. There’s a twist (though I did figure out the ending), but all in all I felt Hawkins’ novel was of a piece with other recent British suspense novels. I actually felt one of the strongest pieces was her portrayal of an alcoholic, rather than the plot or characters which, except for Rachel, were pretty standard types.

However, if you enjoyed The Girl on the Train, you might try books by Ruth Ware, Sophie McKenzie, Belinda Bauer, Sophie Hannah and Collette McBeth, just to name a few. Sophie McKenzie in particular is well worth a look.