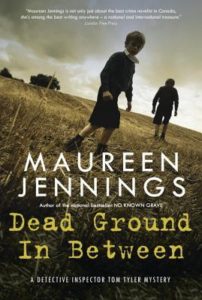 Maureen Jennings is known far and wide—and deservedly so—for her Inspector Murdoch mysteries, set in Victorian Toronto, But she’s also now written four installments in the equally excellent Detective Inspector Tom Tyler mysteries, set in a tiny Shrosphire village during the heart of the war. One of the books was about Land Girls; one about a munitions factory explosion; one about a hospital for the war wounded. In this novel she has settled deeply into Tom Tyler’s life and his assignment in Ludlow, as he gets used to being divorced and missing the love of his life, who is abroad doing secret war work.

When an old man disappears off a farm and he’s later discovered murdered, the crime brings all kinds of elements to the surface. The farm in question has both a Land Girl on site as well an Italian POW from a nearby camp who helps with milking the cows. The old man had had dementia and was a source of conflict through the family, shaking the fundamentals of the relationship between the working farmer, his wife, and the adult son she’s brought with her into the marriage.

The book begins with Tom sitting through the cases of the magistrate’s court—in 1942 the act of riding a bicycle without a headlight and cursing at the constable were charges brought before the court. Two of the men, obvious poachers, are given to Tyler’s remand and he sets them to work scouring the police station. Two young boys who were forced to leave their native Holland are also before the court for causing a ruckus and possible shoplifting from a local store. They, too, fall under Tyler’s remand.

As the story unfolds, it centers on some British Civil War coins unearthed in a field; the plight of the two young boys; and the developing changes in Tyler’s love life as he attempts negotiating his way through dating. While Jennings’ novels are never light and frothy, she brings enough humanity to her dark stories to leaven them. This one is a dark tale of a country enmeshed in a long and terrible war and the darkness that ripples from it, creating havoc everywhere. Even though the death of the old man is not war related, this is still very much a “war” novel.

Jennings is truly expert at setting a scene, and reading one of her novels is an immersive experience. Looking up from the pages it’s almost jarring to discover your sugar and butter aren’t rationed; you don’t have to line up at the grocers for vegetables; you can turn the lights on after dark. She never is anachronistic, or she doesn’t seem to be; her characters have lives and attitudes that fit the period. In fact, I recently read an Agatha Christie novel where a young woman comes home from the WRENS and the tone of that Christie—actually written at the time of the war—and the tone of Jennings’ novel are identical. I hated for this book to end, and am eagerly looking forward to the next Tom Tyler novel.