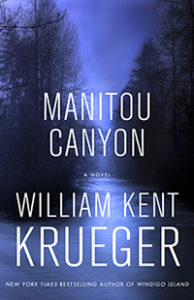 This is a long awaited return for Krueger’s beloved Cork O’Connor. Two years between books is really too long for the rabid fan, of which there are many (I live with two of them). One of the things Krueger has done really beautifully with this series is to paint a long portrait of a family – when we first meet Cork, in Iron Lake (1998), he and his wife Jo are separated. They get back together and then Jo is killed in Heaven’s Keep (2009), literally about half way through this long, now 15 novel series.

During the course of the books, Cork and Jo’s children grow and in Northwest Angle (2011) Cork and his daughter Jenny find a baby. Wauboo. Wauboo, or Little Rabbit, is now a firmly established member of the O’Connor household. The older daughter is away; and little Stevie, as probably many Krueger readers think of him, is growing into a Shaman much like the beloved (and very, very elderly) Henry Meloux. In this novel, it’s almost the eve of Jenny’s wedding and Aunt Rose, Jo’s sister, is back in Aurora for the festivities.

Of course things aren’t going quite as planned as Cork is approached by the grandchildren of a man who had recently disappeared in the Boundary Waters while on a late season camping trip with them. The sheriff’s department has given up the search but Cork agrees to accompany the granddaughter, Lindsey, for one last look around.

The month is November and any search will be halted when the snow starts to fly; it’s also a month filled with heartbreak for the O’Connor family, as it’s the month they lost Jo. While Cork is now with another woman, Rainy, and happily so, all his family members sense some heaviness in his spirit that he can’t or won’t explain.

When Cork and Lindsey hit the Boundary Waters and the area of the disappearance, things begin to go terribly wrong. This becomes a stripped down chase novel, reminiscent of the excellent Boundary Waters (1999). Cork is stuck with a brutal group of people and his family, hearing nothing from him and unable to reach him, shift quickly into full panic mode. More alarmingly Stevie comes home from his spiritual journey in Utah saying he feels something is very wrong with his father.

This ominous sense of foreboding hangs over this novel like a November storm cloud, infusing this action packed story with dread and atmosphere. Crime novels are especially good at exposing the true nature of the people involved in the stories told, as well as the true nature of their relationships, as when everything is on the line there’s no space for falsity. The end of the novel, suitably action packed, also brings to light an issue of concern to Native Americans, as each novel in this series has done so well. This one is no exception. I also love the geographic areas highlighted by Krueger. Most I have never heard of, and he brings them to life on the page.

I finished this book as I have every other one, in tears, as the resolution contains all of life – joy, sadness, regret, tragedy. But mostly joy.