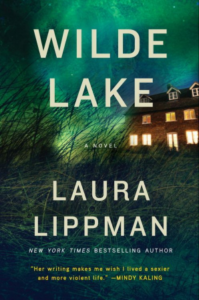 Laura Lippman’s thoughtful new standalone novel, Wilde Lake, assumes the structure of Harper Lee’s beloved To Kill a Mockingbird but brings the story into the present day. The book is very much Lippman’s own, but the shadow of Mockingbird hovers. It enables the reader to consider both more deeply. In Lippman’s incarnation, which opens with an act of violence involving the narrator’s older brother (even ending in a broken arm, as Jem’s act does) all the moving pieces are there. Lippman centers her story on young Lu, who lives with her widowed father and her older brother in the newly created suburb of Columbia, Maryland, an attempt at a Utopian suburb, down to the outdoor structures designed by Frank Gehry.

One of the many things Lippman excels at as a narrator is using two story threads, separated by time, and bringing them together as the book comes to a close. She does that here, as some of the book is told via the young Lu, and some of the book is told from the point of view of the grown up Lucinda, a widowed mother of twins and the first female State’s Attorney of Howard County, Maryland. The post was previously held by her father, a living legend.

There are two crimes in the novel. The early crime, told through the eyes of young Lu, involves her brother and his talented friends as they celebrate the end of high school out at Wilde Lake, when one of them is attacked by some thuggish townies. One of the townies is stabbed to death accidentally and Lu’s brother, AJ, is the hero of the night, having saved the life of the friend who was being attacked.

In the present, sleepy Howard County gets a homicide case (they don’t get too many) and Lucida assumes control. It involves the apparent stabbing of a single woman by a homeless man. As Lucinda investigates, there are repercussions from the past case involving her brother that come to light, tying into the present day one, and it all becomes very complicated.

The thoughtful Lippman seems concerned, in this novel, with truth and lies, and whether the whole truth and nothing but the truth is always for the best. She is examining the repercussions of hiding facts from people and whether they are better off when they do know everything. Lucinda as a grown up and as a child is a real terrier, not giving up on anything and completely, relentlessly ambitious.

Lippman is also a complete master at conveying character and place in a very specific way. In the future, to find out how middle class folks lived in Maryland at the beginning of the 21st century, you could go ahead and read this novel with it’s specific, telling details about suburban culture and mores. On a broader scale, then, how does that very specific culture and community affect the events of the novel?

As Lippman’s characters unravel the facts and the truth behind the case in the past – so much has been withheld from the young Lu, and Lippman brilliantly portrays the way a child knows something is going on, but can’t begin to understand what it might be. As the great Harper Lee was able to do in her novel, Lippman also portrays an unsentimental, tough, smart little girl who grows up into a tough, smart woman.

As the threads of the two stories converge it’s very difficult to stop reading, and when finished, to stop thinking. Why were certain things kept secret? What purpose does it serve when the grown up Lucinda, in her relentless fashion, uncovers them? Her literal rush to judgement creates lasting havoc.

I loved the nods through out to Mockingbird (down to the “chifforobe” in Lu’s father’s room) and as always, I love the way Laura Lippman writes. This quote is long but it gives a real feel of the book:

“…so you will have to trust me when I tell you my story is true. I guess I could swear on my children’s lives – but that strikes me as distasteful. Sometimes I think we hold truth in too high an esteem. The truth is a tool, like a kitchen knife. You can use it for its purpose or you can use it – No, that’s not quite right. The truth is inert. It has no intrinsic power. Lies have all the power. Would you lie to save your child’s life? I would, in a heartbeat, no matter what I was touching. Besides, what is the whole truth and nothing but the truth? The truth is not a finite commodity that can be contained with identifiable borders. The truth is messy, riotous, overrunning everything. You can never know the whole truth of anything.”

This book is definitely one of the best of the year, and I savored every sentence.