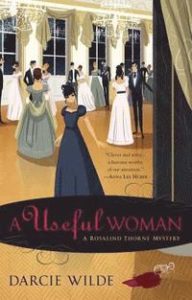 I’ve read other books by Sarah Zettel, a.k.a. Darcie Wilde, but this one is by far my favorite. I loved the setting – (mostly) 1817 London, with a brief prologue in 1812 – and the milieu, to any lover of Jane Austen novels, is a somewhat familiar one, as are the straightened circumstances of the heroine, Rosalind Thorne. Back in 1812, Rosalind comes home dreamily from a dance where she’s almost declared her love for young Devon, only to wake up and find her sister fleeing the house in the middle of the night with their father.

Fast forward to 1817, and the impoverished Rosalind, while maintaining her own tiny household, has lost her mother, Devon is engaged to an old frenemy, and Rosalind’s lot in life is to use her skill set – which now would be seen as that of the efficient event planner or skillful political operative – to secure invitations, make sure the guest lists of balls are correctly populated, and in general, making herself useful to the haute ton, of which she was once an honored member. She has the ear of the highest up and most powerful society matrons as well as the ear of certain members of the press. It’s a useful combination.

As the story opens, society is in an uproar over the possible vacancy on the governing board of Almack’s, a club where many of the important balls of the season are held. (It was the only such club which admitted both men and women). Rosalind is also fielding offers of residence for the “season” – one with Lady Edmund, the mother of the frenemy engaged to Devon; or an offer from her godmother, Lady Blanchard. She ends up accepting Lady Blanchard’s offer, which is immediately complicated when she goes to pick her up at Almack’s one afternoon and not only does she discover the dead body of one Jasper Aimesworth, Lady Blanchard is not far behind. She promptly lapses into hysterics, leaving the capable and practical Rosalind to fend for her.

Jasper is the son of Lady Edmund, as well as a well known gambler and wastrel, but his sister Honoria, Devon’s fiancée, loved him anyway and she asks Rosalind to find out whodunit. Society is reeling – the scandal now attached to Almacks, the death of a prominent son – Rosalind cannot refuse and with her access she has a good chance of finding the answer. Early on she meets the Bow Street Runner assigned to the case and together, they help one another out.

The mystery portion of the novel is clever and the resolution unexpected, but the real delight here are in the characters and setting. Rosalind is a relatable type, a capable woman useful to all, and sensible to boot. Even her reduced circumstances are far more relatable than the grand ballrooms the other characters inhabit. Wilde gives a positively delicious picture of the ins and outs of high society. The book is nicely set up for a sequel, with two possible love interests and another plea at the end for Rosalind’s “help.” How can she say no? And how can any reader refuse to follow her anywhere? This is a completely charming series debut.