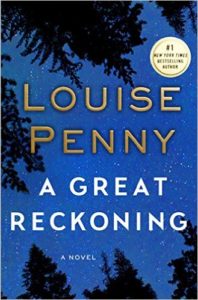 I love Louise Penny, and that’s no secret. There are many, many readers out there who share my adoration. But I was starting to wonder how she could move forward with Gamache being essentially retired in Three Pines… it’s too much like paradise and it’s too settled. There are few reasons to bring him into a case, other than his new son-in-law.

But Ms. Penny has found a way to get Gamache out of the house, so to speak, by making him the new head of the Surete Academy, where new cadets are trained. Of course Gamache being Gamache, he also has an ulterior motive, though it’s clear to no one how he is implementing his plan to clear the academy of rampant corruption. He’s demoted the most recent head of the academy and not fired him, but kept him on staff. He also hires his old frenemy, Michel Brebeuf.

At this point in the series, it certainly adds meaning and emotional resonance to have read all the books (as I suspect most of Penny’s readers have) but coming to this novel uninitiated would not be a bad start. As with all the novels, the story stands well on its own, while also bringing in familiar and well loved characters, like Ruth and Clara.

This novel is truly written on the classic detective story model with a more or less locked room scenario (the Academy), a small circle of suspects, and a healthy scattering of red herrings, not the least of which is a hand drawn map of Three Pines found in an old trunk in the Bistro. Madam Gamache and a group of Three Pines women have been going through the trunk and find this oddity.

A small circle of suspects can either be tedious – if they aren’t well done characters – or fascinating, if the characters are memorable, as they are here. As the story opens Gamache is looking through the files of applicants and deciding on admittance, changing his mind several times on one last cadet, Amelia Choquet. She is accepted, and certainly problematic.

The story focuses on four cadets as well as the fragments of Gamache’s and Brebeuf’s friendship, as well as the traumatic start of Gamache’s young adult life. All fits in with the early on killing of the former head of the academy, a polarizing figure, hated by some, loved by others.

Penny’s chops as a pure mystery writer have never been more in evidence, as each little cog of the story is genuinely mysterious. Why is there a map of Three Pines, which appears on no maps? Why did Gamache choose Amelia Cloquet? What happened in Gamache’s childhood? And, disturbingly, why is Gamache a suspect in the murder of the former head of the academy?

This book was wildly entertaining, one of my favorite recent entries in this wonderful series. I like the new start and new setting for Gamache and I loved the pool of characters. As always, there is a theme: in this novel, I think the theme is what a mistake it is to make judgements based on appearances or outward traits. This is a book to be deservedly savored.