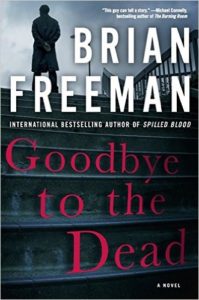 Anyone who has read any of Brian Freeman’s other Jonathan Stride novels set in Duluth know Stride is haunted by the death of his wife, Cindy. He’s in the present happily dating a woman named Serena but it’s been an itch I couldn’t scratch throughout the series – what was Cindy like? How did she die? (I knew she had cancer but the details were murky). What was her relationship with Stride like? Well, readers, those questions are answered at last and I could not have immersed myself more in this novel as I drank in the details of Stride’s marriage. Mr. Freeman, of course, as usual, includes a kick ass thriller on top of all this, so the book is literally impossible to put down.

The book opens with Stride’s adopted daughter, Cat, hanging out in a bar; step-mama Serena sweeps in to remove her from the bar (she’s 17 and pregnant). When they leave, however, Serena interrupts a shooting and chases down the suspect, getting beaten up for her trouble. Then the story backtracks to the past, and we meet Cindy Stride. If, like me, you’ve waited though six novels for details of Cindy, I won’t spoil it for you except to say that she’s certainly worthy of the wait.

The book goes back to a case where Cindy was forced to testify against a friend she’d dropped off at home after a party. Cindy headed home only to hear later that the friend’s husband had been shot and killed soon after she left. While Stride does his best to examine every avenue, Cindy’s friend – an accomplished and beautiful doctor – sure seems guilty and her case goes to trial. It’s the one thing Jonathan and Cindy fight about but around the time of the verdict, Cindy becomes ill. That’s hardly a spoiler as we already know she dies of cancer.

Stride must come to terms with his past, with his feelings for Serena in the present, with his feelings with Cat who is not an easy person to have around, and he must deal with tendrils of the long ago case against the doctor that have turned up in the present. I won’t get into specifics as I don’t want to give away too much of the clever and complex plot, I’ll just say that Mr. Freeman has hit this one out of the park. To me it’s by far the best in the series, and I was a big fan of the last book, The Cold Nowhere. I finished the book in tears, which to me is the true indication of a great read.