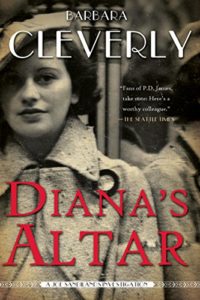 I haven’t picked up a Barbara Cleverly novel in a couple years, despite being a huge fan of the earlier books in this series, which are set in India during the British Raj. Her central character, Joe Sandilands, has since made his way back through Europe and is now back home in London working for Scotland Yard. But enough time had elapsed for me not to compare the books set in India to this one, which is set in Oxford in 1933.

Cleverly has always been a bravura plotter and storyteller; she has twists upon twists and it makes a reader breathless to try and keep up with her facile brain. The opening scene in this novel is a knockout – a young female doctor, bicycling home, is drawn on All Hallows Eve to explore a sinister looking church on the edge of the University campus. She’d been intrigued by a sign she’d seen; but instead of finding some kind of weird cult at work, she finds a dying young man in one of the pews who confesses to his own suicide with his last breath. She’s a doctor so she does her best to save or at least comfort him, and she’s shaken by his death.

Scotland Yard is called in in the form of Joe Sandilands, and the layers of the onion begin to be revealed. In another fabulous sequence, Cleverly establishes that the dead man was a spy for the British government – as is Sandliands. It’s also revealed that the female doctor and Sandilands have a romantic relationship. She’s one of the best characters in the novel and to my disappointment, she was not more front and center though she plays a key role throughout the narrative.

The novel also concerns itself with some goings on at the home of a very wealthy patron of the arts, also a patron the Oxford’s physics department. In 1933, the top project was of course the atom bomb. As Cleverly makes clear (and this part of the book is based on fact) there was a Russian agent working with his British counterparts at the time. The worlds of the arts and science were linked by Oxford social occasions, and the wealthy patron, Sir Gregory Pertinax, is known for having rather scandalous house parties. Joe manages to work his way into Pertinax’s graces and is invited to a party.

The interweaving of the espionage work at the Oxford lab – called the crocodile – and the goings on at the home of Sir Gregory is skillfully done, as is the tracing of Joe’s clever detective work. He’s always a step ahead of this particular reader. I am a firm believer in not reviewing the book I wish had been written – which for me would have focused on the female doctor and her relationship with Sandilands – but once I accepted that I was actually reading a spy novel I settled in for the ride. This is a very well done spy novel and it illustrates a part of 1933 Britain I was not familiar with. There’s a generous afterword at the end that answers some of the questions I had that weren’t answered by the novel itself. I also had to accept that this wasn’t the earlier, almost swashbuckling romantic adventures set in India that lit up the first 4 or 5 novels in this series. There’s still the main swashbuckler at the center of things, however, and Joe Sandilands is a character to be appreciated and enjoyed.