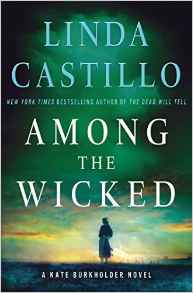 The first chapter of this novel is a master class on how to kick off a gripping thriller. We meet an unnamed woman as she sneaks out of—somewhere?—we just find out it’s very cold and she has to be quiet. We join her on her escape and ultimate chase and death, caring about her more and more the more we read. In indelible strokes and in a short amount of space—only 9 pages—Castillo introduces her story conflict, brings us a character we care about and are invested in, and establishes a vivid setting. Really, if you want to write a gripping crime novel, this would be a great chapter to check out as an example. But if you’re a reader, like most of us, you’ll simply want to find out what’s next.

What’s next is Chief Kate Burkholder, out on one last call—she admonishes an Amish buggy driver about using reflective signage when he’s out on the road—an incident that quickly sets Castillo’s scene in Painter’s Mill, Ohio, in the heart of northeast Ohio Amish country. As she returns to her office to check in with her staff, she’s waylaid by a couple guys from BCI who, as it turns out, want her to go undercover. Kate’s boyfriend, John Tomacetti, a BCI agent himself, is against it.

As it turns out it seems something is amiss in an Amish settlement in upstate New York, and Kate, being not only female but actually Amish and fluent in Pennsylvania Dutch, seems like a perfect choice. Tomacetti has his doubts, as undercover operations can go wrong in so many ways. Nevertheless, Kate is set up with a cover story, a new identity (“Kate Miller”) and a rented mobile home. On arrival, moving into the grim home out in the woods with spotty heating and no chance to use electric light (being Amish), only lanterns, she starts to regret her choice, but she soon makes headway in the community.

It’s apparent before too much time has passed that something is very, very wrong, from the Bishop who rules the community with an iron fist, to the mysterious Amish youth on snowmobiles apparently abusing women, to the culture of no talking where the Bishop is concerned, either out of fear or respect. Kate thinks it’s a mix of both things. As she herself is drawn into a more and more dangerous situation—and Castillo expertly uses winter weather as an added foe in Kate’s struggles—the level of corruption in the community turns out to be high.

Castillo is a thriller writer but she’s also a flat out mystery writer, so her plot structure, clues, and suspect pools are almost traditional. It’s an interesting and enthralling mix. I especially enjoyed this novel as we finally get to understand some of Kate’s roots in the Amish community, the reasons she loved it and the reasons she left it. It serves to flesh out her character even more, and at this point, seven books into a terrific series, Kate Burkholder seems like she should be a real living, breathing human being. And isn’t that why so many of us love series fiction?—the characters, the “what happens next” to them as people. The great stories are the bonus cherry on the cupcake to books that reconnect us with fictional characters who feel like old friends.