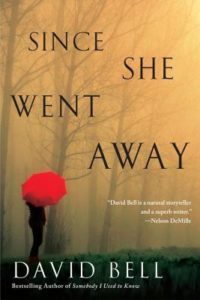 If you want a compelling reading experience, just pick up a David Bell book. Reading the first page can be like leaning over a suspense generating machine—the gears of the story will grab any loose time you have and draw you in irresistibly. Take, for instance, the first few lines of his latest, Since She Went Away:

Boom. There’s obviously something intriguing going on here and the reader will want to know what it is.

Bell’s developing story is anything but mechanical, however, but powered, as most good stories are, by realistic, multifaceted characters. It alternates between two viewpoints; that of Jenna Barton and her son Jared. Jenna is a nurse and single mother who can be a little too candid at times. Her main concern these days is her best friend Celia who has been missing for three months. Since the perpetually late Jenna was supposed to meet Celia at the park the night she disappeared, Jenna has been wracked with guilt and obsessed with the search:

Jenna wondered once again how her life had ended up like this—having to tell her son and her best friend’s daughter she was at a crime scene where a part of a woman’s body had been found.

Her son finds that his life has changed too.

It was a first for Jared Barton: a beautiful girl in his bedroom.

But even this teenage dream has its disconcerting edges. His girl has only recently moved into town and has a very controlling father and an extreme reluctance to discuss her past. Jared is as impetuous as his mother, but he tends more to charge headfirst at his problems rather than talk about them. It doesn’t take a clairvoyant to figure out these two mysteries are going to converge, but I defy anyone to predict exactly how things play out.

The plot twists are adroit and believable, but within the mounting suspense there are also important themes about contemporary society. Nowadays a crime, especially one against an attractive woman is almost inseparable from the ghoulish media din that surrounds it, and Jenna is both provoked and captured by the endless scrutiny and speculation, as well as the lower key, yet just a sinister, online chatter that inevitably proliferates.

There’s also a class aspect, as Celia’s husband Ian is the scion of their small Kentucky town’s reigning family, the rich kid who was Jenna’s biggest high school crush, a relationship even more tantalizing because it never developed into anything after the glamorous Celia swooped in to claim him. Yet now the previously indifferent Ian is reaching out to Jenna, even as his mean girl daughter Ursula is trying to connect with Jared in a not so friendly way.

In short, this book has it all—suspense, character, a mousetrap plot and supple prose, all constructed by the masterful Mr. Bell. Just don’t  get sucked into it if you’ve got a pressing obligation. (Jamie)