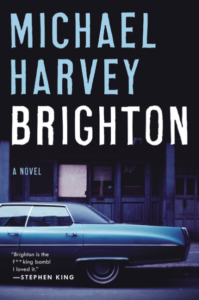 This is one of those books that, as you read it, you know is a pinnacle for the author. It’s one of the best things Michael Harvey has written (which is saying a lot) and it may be the best thing he will ever write. It’s set in the Brighton neighborhood of Boston in 1971 and beyond, and focuses on two boys, Kevin and Bobby. Kevin is the secret pride of his family – a baseball star, an honor student who has tested out of Brighton to go to the best school in Boston, the Latin School – while Bobby is a slightly rough character who has been taken in by Kevin’s grandma, the family matriarch who owns a taxi business.

After an incident of terrible and far reaching violence, Bobby gets Kevin out of Brighton. Fast forward to the present: Kevin is about to win a Pulitzer prize for a story he wrote set in Brighton, and Bobby is a career criminal who mostly works as a bookie and never got out of the neighborhood

What’s so extraordinary about this novel isn’t just the writing – though the writing is the kind of clean, muscular prose that American crime writers have long excelled at, stretching in a line back to Raymond Chandler – it’s the way Harvey grounds his characters and makes the Boston setting come to fully realized life. Like an artist who can sketch a scene with a few well placed brush strokes, Harvey does the same with words.

Kevin and Bobby are so real – outwardly so opposite, inwardly, bound as brothers – they might as well be alive and walking around the streets of Boston. For all I know, they are. Like his fellow Bostonian Dennis Lehane, Harvey also has a flair for the operatic; some of the violent segments and even the eventual perpetrator are almost over the top, but like Lehane, he more than carries it off.   The extreme balances out the ordinary, powering this well told story as Harvey examines the lives of the characters and how where they grew up shaped them as adults.

As I finished this book, thinking about not only whodunit but about Bobby, Kevin and Brighton, I wanted to read it again. It’s by far the best book I’ve read this year, a true classic that deserves to be savored.