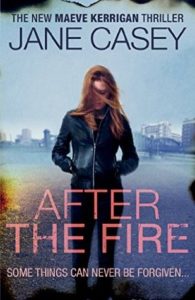 Jane Casey has developed into one of the more reliable police procedural writers around. This is a bravura effort from her, seven books into her series about Detective Maeve Kerrigan, the vagaries of her love life, and her fellow detective, the irascible Josh Derwent. Tackling a fire that breaks out in a housing project (or as the Brits call them, Housing Estates, a fancier term for the same thing), Casey highlights various people who live on the estate, couched mostly in heartbreaking terms. Things only get worse after the fire.

She also focuses on the ongoing stalker in Maeve’s life and the steps she’s taking to get rid of him. As it turns out, it’s not possible without a little help from her friends. However, the stalker story is the “B” story and the fire story is the “A” story as the detectives look at the lives of a single mother and her son; an unhappy old woman forced to move onto the estate; a cheating politician; a couple of sex slaves and a wild and complicated family of gypsies who seem to be up to no good and one of whose children has been injured in the fire.

That sounds like a lot to juggle, and in the hands of a lesser writer, it would be, but in Casey’s more than capable hands it’s smooth as silk, with the each story segment fitting smoothly into the next. The eventual interconnected whole is surprising and satisfying, though not without its element of heartbreak.

The stalker story – one I’ve been hoping Casey would resolve for a long time – is wrapped up in this novel and I think what may be up next are the unresolved feelings Kerrigan and Derwent probably have for one another. To an outsider, it’s clear; to the characters in the book, especially Maeve as she fights to maintain her dignity and reputation on the job, it’s less clear. I don’t see Casey leaving her characters in a happy ever after, however, so I think settling in to see how it plays out is the more realistic option.

While police novels of necessity compress events and make things more dramatic than they might be in real life, Casey as a storyteller has such a deft and capable narrative hand, you won’t want to put any of her books down. From the first to this more recent installment, all are excellent, well done reads.