Cara Black has written her Aimee Leduc series since 1999, when she introduced the scooter-riding, high-top-wearing Parisian Aimee who is always in a different quarter of Paris for her investigations. Cara herself is delightful and interesting, and I think you’ll enjoy meeting her via this interview. 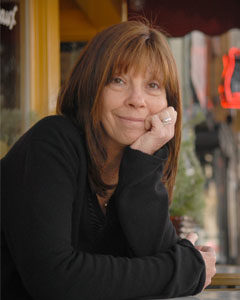 Q: You now have a very long running and successful series set in Paris, though you yourself are American.  Can you talk about your affinity for France, and the reasons for setting your books there?

A: Paris intrigues me. You know Benjamin Franklin said “all Americans have two countries, one of them is France.” I grew up near San Francisco with a Francophile father who loved good food and wine. He sent me to a French Catholic school with nuns who taught us archaic French and gave us summer subscriptions to ELLE magazine (in the 60’s). Even now people show surprise at my arcane knowledge of 60’s French fashions, models and pop stars. When I did make it to France everything felt familiar yet I was always an outsider. In Murder in the Marais, my first book, I just wanted to tell the story of my friend’s mother, a young Jewish girl who hid in the Marais during the German Occupation of Paris in WWII. My friend’s mother was 14 years old and came home from school one day to find her family gone. She stayed in the apartment, went to school, hoping they would return. A year later, in 1944 at Liberation, she searched for them at the train stations, at the Hotel Lutetia on the Left Bank where the Red Cross had a terminus center for returning deportees and she found they’d gone to Auschwitz. My friend told me this story one day in the Marais, on the street where her mother had lived, and it touched me. Years later when I returned to Paris in the mid 1990’s the story came back to me and I wanted to explore these issues of the past, lingering anti-Semitism and how war still touched every generation. Paris cast a spell on me and it hasn’t let go.

Q: How much time do you spend there?

A: Never enough, Robin! Seriously, I’m very lucky to have good friends there who let me couch surf and cat sit. So far, with cheap air fares, I’ve been managing twice a year a few weeks at a time. It’s important for my stories to get the setting right, from the light to the trees in bloom and meet up with flics/police who help my research. I just got back from staying with my dear old friend in Belleville where I stayed (years ago) and started writing my second book, Murder in Belleville… so much has changed since then and yet, a lot is the same. That’s what I notice about going back to Paris. My trips to Paris give me the chance to explore for hidden places, discovering off the beaten track passages and hear tales from the Paris flic I take to lunch by his Commissariat and hanging with a member of the vice squad whose beat are the clubs behind the Champs-Élysées.

Q: Your series is set slightly in the past which has always intrigued me.  Can you talk about the reasons behind that choice a little bit?

A: This was never a conscious decision nor an organized plan on my end, it evolved organically. I was so thrilled to publish my first book that I hadn’t thought of anything else. When my editor asked me where Aimée was going next in Paris, what would be happening with the man she met, etc., I got tongue tied… then she said..”Wait, you are writing a series, aren’t you?” ‘Of course,” I lied. So, I started writing about Belleville, the street life and found a story. It’s been like that with all the books. I’ve just moved Aimée a few months ahead in time (this was the 90’s) and so the stories have stayed in that era (1993-1999 and now the prequel in 1989). I’m so glad too because, while Aimée has a cell phone she doesn’t have to worry about Facebook, Twitter, Instagram or texting. There were few CCTV cameras and everyone paid in francs—much sexier than the Euro. Oh and you could still smoke in the cafés.

Q: Your new book is a prequel, which I am thoroughly enjoying—origin stories are always fun.  Is it freshening things up for you after writing so many books about Aimee?

A: Yes, it’s a challenge too! Pushing my mind back to what it was like for her when she young, more innocent. Actually at the end of Murder on the Champ de Mars life changing things happened to Aimée Leduc and to someone close in her life. I couldn’t see much further ahead for her except from the Emergency room in the hospital where this person close to her, who betrayed her (she believes) and had shot, is fighting for their life. Conflicted, heartbroken, all I knew was that Aimée was at a crossroads. I didn’t know where she’d go from here. My editor asked me what would happen to Aimée, I think I mumbled I hadn’t much of a clue where Aimée’s life would take her now. Perfect segue for a prequel, she said in that brilliant way she has. She said she’d always wondered about Aimée’s origin story, on her younger days, what made her into the private detective (apart from inheriting the agency from her father) she’d become. Where did her dog, Miles Davis, come from and how did she find her partner, René Friant, and how did her vintage Chanel style emerge. Also, she asked, couldn’t we have a chance to meet Aimée’s father, Jean-Claude, who we’ve heard about for 15 books and see him together with her mother and glimpse that love and attraction that drew these two very different people together. So we get to meet her father whose death has affected her in the rest of the series. We also meet her grandfather, Claude, who I’ve sort of fallen in love with—he’s a bon vivant, loves good food and haunting the art auctions and has a mistress. Plus the music! I made a playlist to take me back to 1989 including some songs which Aimée hears in the story: “99 Luftballoons,” “Oh Champs-Élysées,” “Love Shack” by the B-52’s, music by Duran Duran and Madonna. Also hearing wonderful old Parisian songs from the 1940’s by Edith Piaf, Yves Montand, Charles Trenet that brought to me another era and dancing around the laptop.

Q: Do you even think you might write something else—a standalone, a pure historical, or even a different series?

A: Yes, a historical standalone is running through my mind.

Q: Aimee is such a great, kick-ass character—she really takes no prisoners.  Were you influenced by any other mystery characters?  Sara Paretsky and Sue Grafton started such a revolution when they began their careers and you are continuing their tradition, as far as I’m concerned.  Do you have a plan or agenda in mind when you write about her?

A: Both these writers influenced me tremendously. I love V.I. and Kinsey who inspired me to think of writing, as you say, a kick-ass character who’s also vulnerable, likes bad boys and has a much better fashion sense than I do. I wanted to read about the hip young French women who I saw on the streets, the contemporary Paris I was experiencing, the shadowy past of the war years and history on every corner, the social issues, immigrants, ministry intrigues and legacy of a French colonial empire.

Q: And the vintage clothes, shoes and bags—what a fantasy to read about.  What treasures have you found scouring Paris second hand shops?

A: My favorite flea market is at Porte de Vanves, there’s a woman who has a stall with vintage couture and sometimes Chanel. But I also haunt the vide greniers, local street “garage” sales as we’d say, held on the weekends where I’ve discovered i.e. old Limoges, a Lalique perfume bottle, a Cacharel silk blouse. Or the church near Pigalle that has a rummage sale in their crypt every May and it’s amazing.

Q: What’s next for Aimee, now that you’ve written a prequel?

A: She’s going back to 1999 and the Left Bank and investigating in Saint Germain, an area I’ve wanted to write about for a long time. The story came from a retired female Brigade Criminelle (elite homicide squad in Paris) officer who’d been seconded to the Hague to investigate Serbian war crimes for the Hague’s tribunal.

Q: What book was “transformational” for you?  It can be a book you read in 5th grade, as long as it had an impact on your reading life.

A: Robinson Crusoe. It was an old copy with etchings that had been in our family a long time that my father would read to me and my brothers (who were much littler and went for the pictures) on Sunday afternoons. The adventure story thrilled me, I loved that tree house, how he had to be self-sufficient. But it was also that warmth of sitting on the arm of my father’s chair, leaning on his shoulder as he read, my squirming brothers and the oohs and ahh when exciting things happened. And how my father would always leave it on a cliffhanger that hooked me. I think in some way that was the closest time we were a family, too. So that’s in the mix. An adventure book wasn’t only an escape but a way to figure things out together and such a positive, fun way that it impacted me.

Q: Finally, what do you hope readers take away from your books—what’s most important for you to get across?

A: I hope readers feel like they’ve taken a trip to Paris without the airfare. That they feel like they are in Aimée’s high heels on that street, smell the butter scents from the bakery, see a Paris that’s off the beaten track, the art, history and the issues facing a multi-cultural Paris today.